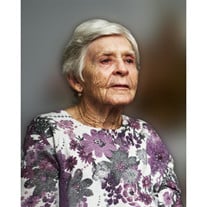 Margaret (Klinger) Frum, 92, of Waverly, WV, died on Tuesday, April 11, 2017, at Mon General Hospital in Morgantown WV, following a brief illness. She was born December 14, 1924, in Churchtown, OH, to John G. and Alice Schwendeman Klinger. She was a graduate of Waterford High School and St. Joseph's Hospital's nursing program in Parkersburg, WV. Margaret's nursing career took her from Florida, to Virginia, back to St. Joseph's, and finally to the pediatric ward of Marietta Memorial Hospital where she retired after a 35 year career. Following her retirement, Margaret enjoyed traveling the country with her husband, Howard Olden Frum, making multiple trips across the United States by car. She often told stories of her trips to Las Vegas with Howard and friends, always mentioning the Rat Pack, Elvis, and the many other shows they saw while there. Margaret was strong in her faith and was a member of St. Mary's Catholic Church, Marietta OH. She is survived by her son, Howard Robert Frum (Diana), with whom she resided since 2003 in Morgantown, WV. She is also survived by two grandchildren, Oliver Frum of Seattle, WA, and Julianna Frum of Starkville, MS; and her brother Robert Klinger (Margaret) of Watertown, OH; along with multiple, loving nieces and nephews. She was preceded in death by her husband Howard; her parents; her sisters Marian and Ella Mae, and her brother John. Family will greet friends on Thursday, April 20, 2017 from 9:00 to 9:30 a.m. at the Marietta Chapel of Cawley & Peoples Funeral Home. Margaret's Funeral Liturgy with Mass will be celebrated at 10:00 a.m. that morning at the Basilica of St. Mary of the Assumption in Marietta Ohio. Burial will follow in Riverview Cemetery in Williamstown. Refreshments will be offered following burial in the basement of The Basilica. Memorial contributions, in lieu of flowers, may be made to Williamtown Welfare League Food Pantry, c/o Mary Jo Kinney, Tres., 403 Dodge Street, Williamstown, WV 26187 or St Ursula's Food Pantry, PO Box 18, Pursglove WV 26546.

The family of Margaret Frum created this Life Tributes page to make it easy to share your memories.

Send flowers to the Frum family.