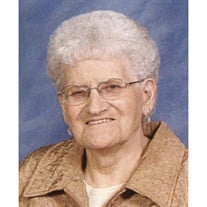 Margie M. Morgenstern, 90, of Marietta, died Easter morning, April 5, 2015 at Emeritus at Marietta. Born September 4, 1924 in Salem Township, Washington County, Ohio, she was a daughter of the late Brady M. and Carrie L. Schenk Kehl. Margie was a graduate of Salem-Liberty High School. Margie had worked at Remington Rand Propeller Division during WWII, and at B. F. Goodrich for several years. She had retired from the U. S. Postal Service, following 27 years of employment. Ten of those years she served as the Postmaster at Whipple, Ohio. She and her husband moved from Whipple to Marietta in 1985. Margie was a member of the First Congregational United Church of Christ, where she had served on various boards. She also was a member of Aurelius Chapter 60, Order of Eastern Star at Macksburg, where she was a Past Worthy Matron. She married the love of her life. Delmer C. Morgenstern January 6, 1951. He preceded her in death March 9, 2001. She is survived by one son, Rick L. Morgenstern (Sandra), of Vincent; three grandchildren, Brandy E. Circle (Grant), of Dublin, Nicholas A. C. Morgenstern (Lindsey), of Whipple, and Jeremy L. Warner (Jody), of Lexington, KY; eight great-grandchildren; a sister, Betty L. Erb, of Marietta, who spent the last several years caring for Margie as only a sister could; a brother, Neal F. Kehl (Alma), of Vincent; a sister-in-law Mabel Morgenstern, of Marietta and several nieces and a nephew. Funeral services will be held 11:00 am Wednesday, April 8, 2015, at the First Congregational Church, with the Rev. Linda Steelman officiating. Friends may call at the Marietta Chapel of Cawley & Peoples Funeral Home on Tuesday, where the family will be present from 2-4 and 6-8 pm. Also at the church for one hour prior to services on Wednesday. Eastern Star services will be held at 7:00 pm Tuesday. Burial will be at Salem Township Cemetery. Memorial donations in Margie's memory may be directed to First Congregational Church, 318 Front Street, Marietta OH 45750, or to Marietta Home Health & Hospice, 405 Pike Street, Suite I-1, Marietta.

The family of Margie M Morgenstern created this Life Tributes page to make it easy to share your memories.

Send flowers to the Morgenstern family.