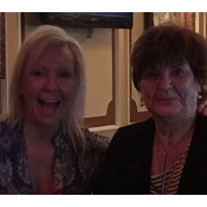 Marie Georgette Devol, 86, of Marietta, Ohio, died Tuesday, November 14, 2017 at Marietta Memorial Hospital, surrounded by her family and friends. She was born on February 13, 1931, in Liege, Belgium, to George and Julienne Werk. Marie met her husband, Jerry Barker Devol, in Belgium, while he was serving post-WWII. They married there on August 25, 1956, and then came to the US with her not speaking a word of English. Later, she mastered the English language, plus taught her daughter, Ruth, to speak French fluently, which was then passed on to her granddaughter, Marie-Claire. Marie was a member of the Basilica of St. Mary of the Assumption. She had a passion for swimming, and as recently as two months ago, doing so multiple times a week at the Betsey Mills Club, where she was a member. Marie loved to travel with her daughter and granddaughter, and spending time with her friends in social groups. She is survived by her daughter, Ruth Wharton (Jeff Gray) of Dallas, TX; granddaughter, Marie-Claire Wharton and her father, Paul Wharton; sister, Francine Werk; and many nieces and nephews. She was preceded in death by her husband on April 2, 1997. Her Memorial Mass will be celebrated at 10:00 a.m. on Friday, November 17, 2017 at the Basilica, with The Rev. Msgr. John Michael Campbell celebrating. There will be no visitation. Burial will follow in Putnam Cemetery.

The family of Marie Georgette Devol created this Life Tributes page to make it easy to share your memories.

Send flowers to the Devol family.