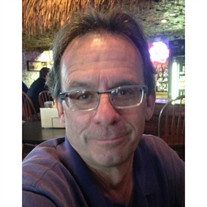 Mark William Wharton, 64, of Macksburg, Ohio, died Sunday, May 19, 2019 in Columbus, Ohio. He was born on September 6, 1954 in Marietta, Ohio, to William E. and Mary J. Beardmore Wharton. Mark was a 1972 graduate of Marietta High School, and attended Marietta College. He was the owner of Tropic Air, Inc. in Marietta, which he started in 1983. Mark was a member of the 6th & Washington Street Church of Christ. He loved his farm, especially being on his tractors, mowing, and sometimes mowing more than he should (the wild flowers)! Mark has a Firebird that he enjoyed working on, but most of all his life revolved around his family, farm and work. He is survived by his wife, Julia Anne Graham Wharton, whom he married on December 19, 2012; his parents of Marietta; three children, Lucas and Amanda Wharton, both of Marietta, and Jessop Wharton of Parkersburg, WV; four step children, Jennifer Hinton (Shawn) of Marietta, Graham Cochran of Vienna, WV, Jacob Zide (Stephanie) of Zanesville, Ohio and Kevin Zide of Nelsonville, Ohio; grandchildren, Reese, Sophia, Kylee, Graham, Lex, Reese and Rowan; brothers, Craig Wharton (Diane) of Crownsville, MD, Paul Wharton (Silvia) of Coppell, TX and Keith Wharton (Leslie) of Santa Clara, CA; many nieces and nephews; special aunt, Ruth Wharton and cousin, Lisa Wharton; sister in law, Dawn Parker (Jim) of Circleville, Ohio; and brothers in law, Richard Graham (Sue) of Canyon Lake, TX and Randy Graham of Columbus. He was preceded in death by many aunts and uncles, including Robert Wharton; and his mother in law, Betty Graham. Funeral services will be held at 10:00 a.m. on Friday, May 24, 2019 at the Marietta Chapel of Cawley & Peoples Funeral Home, with Roger Rush and Rev. Linda Steelman officiating. Visitation will be on Thursday from 5 to 7 p.m. Donations may be made to a charity of the donor's choice, in Mark's memory.

Mark William Wharton, 64, of Macksburg, Ohio, died Sunday, May 19, 2019 in Columbus, Ohio. He was born on September 6, 1954 in Marietta, Ohio, to William E. and Mary J. Beardmore Wharton. Mark was a 1972 graduate of Marietta High School, and... View Obituary & Service Information

The family of Mark William Wharton created this Life Tributes page to make it easy to share your memories.

Send flowers to the Wharton family.