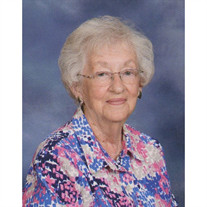 Mary Lou Doan, 87, of Marietta, died Wednesday, January 27, 2016, at The Haven at Harmar Place. She was born July 8, 1928 in Marietta to Frank E. and Dorothy M. Ketter Grubb. She was a 1946 graduate of St. Mary's Catholic High School. Mary had worked at JCPenney in Marietta. She was a member of the Basilica of St. Mary of the Assumption and the CWC. Mary had enjoyed camping, cards and needlework. She is survived by her daughter, Carol O'Grady, of Marietta; son, Jeff Doan (Margaret), of Gainesville, FL; grandsons, Eric Doan (Anne) and Matt Doan (Julia); granddaughters, Betsy Wood (Dave) and Darcie Porter (Chris); five great grandchildren, Hannah and Walker Wood, Henry and Audrey Porter and Brady Doan ; sister in law, Lila Hill and brother in law, Jim Doan (Wilma). She was preceded in death by her husband, Robert Brady Doan on December 2, 2012, they had been married on March 27, 1948; also preceded by sisters, Martha Needham and Margaret Grubb and her son in law, John O'Grady. The family would like to thank the staff at The Haven for the excellent care they gave Mary. Funeral Liturgy, with Mass, will be at The Basilica at noon on Saturday, January 30, 2016, with Msgr. John Michael Campbell as celebrant.. The family will greet friends from 10:00 a.m. until time of mass at the Basilica. Burial of her ashes will be in New St. Mary's Cemetery. Donations may be made to St. Mary's School Foundation.

The family of Mary Lou Doan created this Life Tributes page to make it easy to share your memories.

Send flowers to the Doan family.