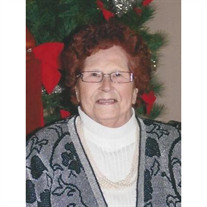 Mary Virginia Grasley, 90, of Marietta, died Wednesday, May 4, 2016, at Mt. Carmel East in Columbus. She was born August 17, 1925 in Waterford, to Leo Ambrose and Alice Barbara Keller Strahler. Mary had worked at Dime Bank and later, Settlers Bank. She was a member of the Basilica of St. Mary of the Assumption and the CWC. Mary had been involved in the auxiliaries of Lowell Legion #750 and the VFW #5108. She enjoyed quilting, embroidering, cooking, and playing bingo. Mary is survived by three daughters, Gloria Jahahn (George) of Gahanna, Diana Merrow (Gregory) of Marietta and Victoria "Vicki" Steele (John) of Gahanna; two sons, Robert "Bob" Grasley (Debbie) of Shoreview, MN and Donald "Don" Grasley (Doreen) of Marietta; fourteen grandchildren, ten great grandchildren; and her sister, Bertha Pottmeyer of Marietta. She was preceded in death by her husband, Herbert Jacob Grasley, in 2006; a son, John "Jack", in 2014; grandson, John Paul Grasley; great granddaughter, Leona Louise Jahahn; eight brothers, Francis, Arthur, Cecil, Louis, Bernard, Howard, Harold and Ralph and two sisters, Ruth Neader and Leona Henniger. Funeral Liturgy, with Mass, will be held at 10:00 a.m. on Saturday, May 7, 2016, at the Basilica of St. Mary of the Assumption, with the Rev. Msgr. John Michael Campbell as celebrant. Visitation will be on Friday from 3:00 to 8:00 p.m. at the Marietta Chapel of Cawley & Peoples Funeral Home. There will be a Vigil Service at 4:00 p.m. on Friday. Burial will be in New St. Mary's Cemetery.

The family of Mary Virginia Grasley created this Life Tributes page to make it easy to share your memories.

Send flowers to the Grasley family.