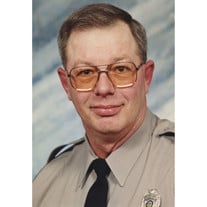 Mitchell Robert Ruble, 66, of Lowell, Ohio, died Saturday, February 18, 2017 in Boise, Idaho. He was born on December 4, 1950, in Grand Rapids, Michigan, to John and Marion Schriber Ruble. Mitch lost his parents at a very young age in an automobile accident and was raised by his adopted parents, Richard & Loraine Snyder. Mitch was a 1969 graduate of Lowell High School in Michigan, then moved to the Mid-Ohio Valley to be closer to his family. He served in the Army and Air Force and retired after 28 years of service. He was a Vietnam Veteran with the Americal Division and the 173rd Airborne Brigade, earning a Bronze Star. Mitch worked for the State of Ohio as a Corrections Officer from 1996 to 2010, and received the Gold Star of Valor from the state. He was also a retired Journeyman Millwright. Mitch was a firearms instructor for the State of Ohio, Boy Scout and Cub Scout Assistant Scoutmaster and volunteer for 12 years, and avid firearms collector and enthusiast. He loved history, hunting, fishing, reloading, military surplus stores, and military history, especially WWII. Mitch was a retired Senior Master Sergeant of Security Forces, and always spoke highly of his group members, whom he loved dearly. He loved spending time with his family and grandchildren, and his dog, BoBo. He is survived by his wife, Sandra Simmons Ruble, whom he married on March 16, 1977; three children, Matthew Ruble (Sheena), Heather Wolfert (David) and Adam Ruble, all of Lowell; five grandchildren, Luke, Jocelyn, L.J., Davin and Davie; two siblings, Mark Ruble (Charlotte) of Marietta and Lori Miller of Arizona; and many nieces and nephews. He was preceded in death by his parents; adopted parents; infant son, Michael Ruble; and step siblings, Larry Snyder and Sandy Smith. Funeral service will be on Sunday, February 26, 2017 at 2 p.m. at the Lowell Chapel of Cawley & Peoples Funeral Home, with Rob Tuttle officiating. Visitation will be on Saturday from 2 to 4 and 6 to 8 p.m. and for one hour prior to services on Sunday.

Mitchell Robert Ruble, 66, of Lowell, Ohio, died Saturday, February 18, 2017 in Boise, Idaho. He was born on December 4, 1950, in Grand Rapids, Michigan, to John and Marion Schriber Ruble. Mitch lost his parents at a very young age in an automobile... View Obituary & Service Information

The family of Mitchell Robert Ruble created this Life Tributes page to make it easy to share your memories.

Send flowers to the Ruble family.