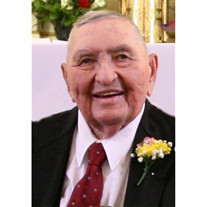 Norbert Louis Lang, 86, of Marietta, died Monday, August 18, 2014. He was born July 11, 1928 in Lowell, Ohio to William N. and Eleanor Dyar Lang. Norbert served our country during the Korean Conflict as a Sergeant in the Marines from 1951-1953 then married his wife of 60 years, Charlotte Anne Walter, on May 4, 1954. He retired from BF Goodrich in October of 1988 after 33 years of employment. Norbert was a member of St. John the Baptist Catholic Church, the Knights of Columbus in Beverly, a 50 year member of the American Legion, Post 750, in Lowell and the 343 Union at BF Goodrich. He is survived by his wife, Charlotte, seven daughters, Paula Adams (Robert) of Cambridge, Cheryl DeWitt of Marietta, Kathleen Shenkel (Ronald) of Niceville, FL, Marilyn Zoller (Tim) of Marietta, Elaine Hart (Greg) of Carlisle, OH, Lisa Kane (Chris) of Columbus, IN, and Tonia Skinner (Jeffrey) of Waterford, three sons, James Lang (Ludi) of Marietta, Christopher Lang (Georgia) of Marietta and Keith Lang (Taylor) of Columbus, 30 grandchildren, nine great grandchildren, four sisters, Mary Huck (Regis) of Vincent, Patricia Stehly (Kenneth) of Lowell, Maxine Warnock (Thurman) of Jeffersonville, OH and Martha Stevens of Lowell, one brother, Paul Lang (Muriel) of Pataskala, OH and several nieces and nephews. He was preceded in death by his parents and two brothers, Howard and Eugene. Funeral Liturgy with Mass, will be celebrated at 10:00 a.m. on Thursday, August 21, 2014 at St. John's Catholic Church in Churchtown, with The Rev. Virgil Reischman celebrating. Burial will follow in the church cemetery, with full military honors. Visitation will be on Wednesday from 2-4 and 6-8 p.m. at the Marietta Chapel of Cawley & Peoples Funeral Home, with a Vigil service being held at 3 p.m. In lieu of flowers, donations may be made to Marietta Home Health and Hospice or to St. John School Foundation.

Norbert Louis Lang, 86, of Marietta, died Monday, August 18, 2014. He was born July 11, 1928 in Lowell, Ohio to William N. and Eleanor Dyar Lang. Norbert served our country during the Korean Conflict as a Sergeant in the Marines from 1951-1953... View Obituary & Service Information

The family of Norbert Louis Lang created this Life Tributes page to make it easy to share your memories.