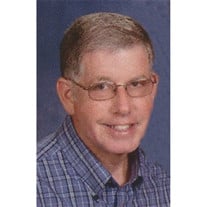 Patrick Aloysius Engle, 65, of Mineral Wells, WV, died Monday, August 29, 2016, at Camden Clark Medical Center in Parkersburg. He was born September 29, 1950 in Marietta to William Phillip and Eileen Frances Potter Engle. Pat was a 1968 graduate of Fort Frye High School and attended Jackson County Technical Center and Washington Technical College. He had worked at Patton Manufacturing, Birmingham Bolt and Landmark. Pat was a member of the Basilica of St. Mary of the Assumption. He had volunteered at Marietta Memorial Hospital. Pat had organized the breakfast gatherings for Patton Retirees at Shoneys and enjoyed gardening, horses, being outside and riding his backhoe. He is survived by his wife, Sharon Higgins Layton Engle, they were married on January 1, 2005; a son, Patrick A. Engle, II of Marietta; stepsons, Eddie Layton (Stacy) and Teddy Layton, all of Mineral Wells; grandchildren, Andres' and Elias Lemon-Engle and Jacob and Casey Layton; a brother, Chris Engle (Jill) of Manchester, Ohio; three sisters, Marie Miller (Paul) of Lima, Ohio, Angela Keiser (Steve) of Vienna, WV and Kathleen Hall (Chris) of Reno, Ohio and many nieces and nephews and great nieces and nephews. He was preceded in death by his parents, a sister, Julia Engle, and his first wife, Wana Engle. Funeral Liturgy, with Mass, will be held at 10:00 a.m. on Thursday, September 1, 2016, at the Basilica of St. Mary of the Assumption, with the Rev. Msgr. John Michael Campbell as celebrant. Visitation will be at the Marietta Chapel of Cawley & Peoples Funeral Home on Wednesday from 2 to 4 and 6 to 8 p.m., with a Vigil Service at 3:00 p.m. Burial will be at Our Lady of Mercy Cemetery in Lowell. Donations may be made in Pat's memory to the Memorial Health Foundation, P.O. Box 97, Marietta, Ohio 45750.

The family of Patrick Aloysius Engle created this Life Tributes page to make it easy to share your memories.

Send flowers to the Engle family.