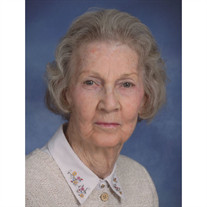 Peggy E. Sands, 86, of Marietta, died Friday evening, March 11, 2016 in Marietta. Born September 8, 1929, in Parkersburg, WV, she was a daughter of the late William D. and Garnett L. Sims Shreeves. She was a 1947 graduate of Parkersburg High School and attended Mountain State Business College. Peggy had worked at Pure Oil Company and Rig & Reel, both in Parkersburg. She also was proud to have worked for the Department of the Navy at the Pentagon in Arlington, VA, where she had top secret clearance. She was a member of the First Baptist Church in Marietta. Also a member of the Marietta Welfare League. On September 20, 1951 she married Captain James E. Sands. She worked with Captain Jim, Captain Jim Jr. and Captain Jason on the Valley Gem Sternwheeler. Peggy is survived by her son, Jason J. Sands (Heather Morgan); grandson, Andrew J. Sands and granddaughter Lily Sands, of Marietta; a sister, Betty King, of Vienna, WV; niece Cindy Moore (Fred) and nephews Dick and Jeff King, all of Parkersburg, and several great nieces and great nephews. She was preceded in death by her husband on June 8, 1998, a son, James E. Sands, Jr., brother-in-law Maj. Gen. Harry J. Sands, Jr. and his wife Leah, of Melbourne, FL, and brother-in-law and sister-in-law Malcolm and Bette Mac Rae of Waco, TX. Funeral services will be held at 10:30 am Wednesday, March 16, 2016, at the Marietta Chapel of Cawley & Peoples Funeral Home with Pastor Chad Mugrage officiating. Burial will be in Mound Cemetery. Peggy's family will greet friends at the funeral home on Tuesday, from 4-8 pm. Memorial contributions in Peggy's honor may be directed to the First Baptist Church of Marietta, 301 Fourth Street, Marietta, OH 45750.

Peggy E. Sands, 86, of Marietta, died Friday evening, March 11, 2016 in Marietta. Born September 8, 1929, in Parkersburg, WV, she was a daughter of the late William D. and Garnett L. Sims Shreeves. She was a 1947 graduate of Parkersburg High... View Obituary & Service Information

The family of Peggy E Sands created this Life Tributes page to make it easy to share your memories.

Send flowers to the Sands family.