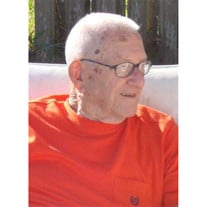 Marietta lost a real treasure in Phillip Hawn, liked by all who met him and would help all who asked. Phil was born in Burton, Ohio Dec. 19, 1925 to Dr. William S. Hawn and Martha (Schuler) Hawn, eventually moving to this area in the mid-thirties. He was active in sports, excelling at track and field, and football for Marietta High School. One of his fondest memories came when he as a freshman dressed with the varsity to kick off. On the opposing team, Martins Ferry was Lou "The Toe" Groza, now in the Football Hall of Fame. In the midst of WWll he was drafted out of high school into the Navy, trained as a Petty officer and when based in Palermo, Italy ran a beach house for the Navy. When he returned to Marietta he finished high school. He worked at Remington Rand painting file cabinets then eventually moved to Williamson Chevrolet and worked there for 27 years. He then changed gears and worked hard to get his teaching certificate and helped the Joint Vocational Center start up its Auto Body program. He taught countless young men a skill and a trade. He also helped a few grow up. Phil was also one of the fathers who helped build the Bantam Baseball program. He and the group of, mostly dad's, would spend their evenings building backstops, benches, dugouts and fields. He was also an avid camper, and loved to take the family out either on the weekend or on longer journeys. Phil followed the Cincinnati Reds with a passion rarely missing a game. He was a member of the American Legion Post 64, The VFW 5108, and the Knights of Columbus. But with all this his family and wife were most important to him. Phil is survived by his wife of 68 years, Evelyn M. (Kuehn) Hawn. Children, Steve (Donna), their kids Stephanie, Kymberly and Eric. Linda Bennett (John), her kids Ben, Tammy (Joe). Larry, his kids, Robert (Heather), David (Vienny), Matthew (Dawn), Michelle (Joseph), 15 great grandchildren. One sister, Charlotte Chotlos of Newark, OH. He was preceded in death by his parents, sisters Barbara and Dorothy, a brother Robert and a daughter-in-law Susan Hawn. Funeral Liturgy, with Mass, will be held at The Basilica of St. Mary of the Assumption at 10 a.m. on Wednesday, December 2, 2015, with The Rev. Msgr. John Michael Campbell as celebrant. Visitation will be at the Marietta Chapel of Cawley & Peoples Funeral Home on Tuesday, from 2 to 8 p.m., with a Vigil Service at 3 p.m. Entombment, East Lawn Mausoleum, with full military honors. In lieu of flowers, make contributions to the Basilica of St Mary of the Assumption or The Knights of Columbus #478 both at 506 4th St Marietta, OH 45750.

Marietta lost a real treasure in Phillip Hawn, liked by all who met him and would help all who asked. Phil was born in Burton, Ohio Dec. 19, 1925 to Dr. William S. Hawn and Martha (Schuler) Hawn, eventually moving to this area in the mid-thirties.... View Obituary & Service Information

The family of Phillip Franklin Hawn created this Life Tributes page to make it easy to share your memories.

Marietta lost a real treasure in Phillip Hawn, liked by all who...

Send flowers to the Hawn family.