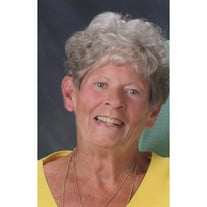 Phyllis Wilson Heiss, 73, of Marietta died Wednesday, January 28, 2015, at her home. She was born April 26, 1941 in Salem, WV to Merle and Maysel Heilman Pierce. She was a 1960 graduate of Salem High School. Phyllis had been employed at the... View Obituary & Service Information

The family of Phyllis Heiss created this Life Tributes page to make it easy to share your memories.

Send flowers to the Heiss family.