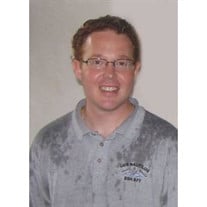 Preston John Huck, 43, of Marietta, Ohio passed onto the Divine Light of his Heavenly Father on Tuesday, October 29th, 2019. Born February 4, 1976 in Marietta, Ohio, he is the beloved son of Neil and Joyce Huck. Preston received a Bachelor of Science in Mechanical Engineering, graduating first in his class at Ohio University. Following graduation, Preston worked as an engineer for Bechtel Corporation in New York, Ohio, and Pennsylvania. He also received a Master of Arts from Duquesne University while in seminary at St. Paul's in Pittsburgh, in addition to a Master of Theology during his time at the Pontifical North American College in Rome, Italy. As a youth, he served as acolyte for St. Mary's Catholic Church and attended St. Mary's Elementary School. He participated in Cub Scouts and Boy Scouts and earned the highest rank of Eagle Scout. Preston enjoyed riding his motorcycle, watching Ohio State football, camping, and serving in the various parishes during his studies home and abroad. His quiet dignity and graceful spirit often lent itself to counseling those suffering or those in need, and he experienced great joy in the pursuit of religious life. The abiding love he possessed for his Savior was an example to those who knew him, and a privilege he embraced. Preston is survived by his parents, Neil and Joyce Huck of Marietta, Ohio; grandparents Virgil and Alice Maze of Belpre, Ohio; sister Charity Hoopes (Nathan) of Clarksburg, Maryland; brother Daron Huck of Truckee, California; sister Joselyn Yonker (Tom) of Newark, Ohio; nieces Paige Huck and Olivia Christian of Newark, Ohio; in addition to many aunts, uncles, and cousins. Preston was preceded in death by his sister, Beth Elaine, as well as his paternal grandparents, Herbert and Clara Huck. Visitation will be held at Cawley & Peoples Funeral Home in Marietta, Ohio on Monday, November 4th between 2pm-8pm, in addition to a vigil service at 3pm. The funeral mass will be celebrated at the Basilica of St. Mary of the Assumption in Marietta, Ohio at 10am on Tuesday, November 5th by The Reverend Monsignor John Michael Campbell. Burial will follow at Our Lady of Mercy Catholic Cemetery in Lowell, Ohio. The family requests that any memorial donations be made to the St. Vincent de Paul Society. Cawley & Peoples Funeral Home is honored to serve the Huck family and offers online condolences and many more resources by visiting their website, CawleyandPeoples.com .

Preston John Huck, 43, of Marietta, Ohio passed onto the Divine Light of his Heavenly Father on Tuesday, October 29th, 2019. Born February 4, 1976 in Marietta, Ohio, he is the beloved son of Neil and Joyce Huck. Preston received a Bachelor... View Obituary & Service Information

The family of Preston John Huck created this Life Tributes page to make it easy to share your memories.

Preston John Huck, 43, of Marietta, Ohio passed onto the Divine...

Send flowers to the Huck family.