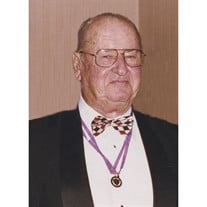 Rankin Gerald Brunton passed away at his home surrounded by family on the evening of July 8, 2015. He was the third child of nine, born on June 16, 1917, to James and Cora Rankin Brunton. He grew up in Glouster, Ohio and graduated from Glouster High School. Rankin attended Ohio University, University of Kentucky, and officer's candidate school at Cornell University in preparation for World War II. He joined the U.S. Navy, reached the rank of First Lieutenant, and served in the Pacific. He married Barbara Ann Richardson on June 22, 1945. They were married for 63 years and raised six children. Rankin worked for Rich-Loaf bakeries, Becker Motors, and the ODOT. He attended night school at Marietta College in preparation to start his own businesses. In 1963, he and Barbara purchased American Supply Company. Later they also purchased Producers Supply, Sprague Electric, and Crescent Supply companies. He was preceded in death by his wife, Barbara, sister, Gloria, and brothers, James, Lovell, Emerson, Wallace, and Farley. He is survived by siblings, Betty Dennis (Kenneth), and Trevison Brunton (Dorothy). He is survived by his children, Gregory (Brian), Geoffrey (Shelly), Christopher (Candy), Bruce (Nan), Ann Cohen (Jerry), and Susan Reinman (Jim). There are fourteen grandchildren and five great grandchildren. Rankin is also survived by his brother-in-law, Leonard Richardson Jr. (Sharon) and his sister-in-law, Mabel Brunton. His caregiver for the last several years was Charlie Holiday. Rankin was a life member of Glouster Masonic Lodge 607, a member of Nemesis Temple, and a member of the Royal Order of Jesters 156. Funeral services will be at 1:00 p.m. on Saturday, July 11, 2015, at the Marietta Chapel of Cawley & Peoples Funeral Home, with the Rev. David Smith officiating. Friends may call on Friday from 4:00 to 7:00 p.m. at the funeral home on Friday and one hour prior to the services on Saturday. Entombment is at East Lawn Mausoleum, with full military honors. There will be Masonic Services on Friday evening at the funeral home. Donations may be made to Marietta Memorial Health Foundation, P.O. Box 97, Marietta, Ohio 45750.

Rankin Gerald Brunton passed away at his home surrounded by family on the evening of July 8, 2015. He was the third child of nine, born on June 16, 1917, to James and Cora Rankin Brunton. He grew up in Glouster, Ohio and graduated from Glouster... View Obituary & Service Information

The family of Rankin Gerald Brunton created this Life Tributes page to make it easy to share your memories.

Rankin Gerald Brunton passed away at his home surrounded by family...

Send flowers to the Brunton family.