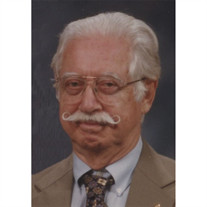 Raymond Norbert Zoerkler, 87, long time Marietta resident, died Saturday, October 19, 2013, in Fairfield, Ohio. He was born August 7, 1926 in Cincinnati to Louis and Elise Weiseit Zoerkler. He was a U.S. Air Force veteran of World War II. Mr. Zoerkler was a geologist, having received his degree from the University of Cincinnati. He had worked at Birdwell and Pennzoil in Bradford, Pennsylvania, as well as Pennzoil in Parkersburg, West Virginia. Raymond also worked as an independent petroleum geologist while living in Marietta. He was a member of Rotary Club of Marietta, the American Association of Professional Geologists, the Ohio Geological Society and the Marietta Reading Club. Mr. Zoerkler had been a volunteer at the Campus Martius Museum. While living in Pennsylvania he was instrumental in having the University of Pittsburgh open a branch in Bradford. Raymond is survived by two daughters, Cindy Miller (Gary) of Fairfield and Jennifer Zoerkler of Reston, Virginia, two grandsons, Nicholas Miller (Laura) of Anchorage, Alaska and Jason Miller (Jamie) of Westmont, NJ, a sister, Lorraine Cramer of Clarion, Pennsylvania, a brother, Jim Zoerkler (Jeanne) of Chambersburg, PA, and several nieces and nephews. He was preceded in death by his wife, Phyllis Lorraine Goble Zoerkler in 2006. Graveside services will be held at 10:00 a.m. on Wednesday, October 23, 2013 in Mound Cemetery, with Patricia Peoples officiating, as well as full military honors being observed. Friends may call on Tuesday from 6:00 to 8:00 p.m. at the Marietta Chapel of Cawley & Peoples Funeral Home. Donations may be made to the Rotary Scholarship Fund, c/o Marietta Noon Rotary, P.O. Box 1138, Marietta, Ohio 45750. or to the Campus Martius Friends of the Museums, 601 Second Street, Marietta, Ohio 45750.

The family of Raymond Norbert Zoerkler created this Life Tributes page to make it easy to share your memories.

Send flowers to the Zoerkler family.