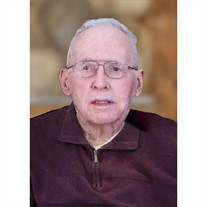 Richard Louis Pottmeyer, 90, died at Heartland Nursing Home after being a resident there for 4 ½ years. He was born July 15, 1925, son of Gilbert and Aline Long Pottmeyer. He graduated from Waterford High School. He worked at Williamson Chevrolet repairing cars. He retired from B.F. Goodrich, after 35 years of employment. He was a member of St. John's Catholic Church at Churchtown, member of the Holy Name Society and Senior Citizens Club. Richard enjoyed playing music, singing and going to rest homes playing music for them. On August 11, 1948 he married Bertha Strahler, who survives him, at St. John's Church. Also surviving are eight children, Donna Sommer (Nick) of Cincinnati, Janet Steinel (Larry) of Marietta, Judy McCoy of Reno, Rick Pottmeyer (Kim) of South Carolina, Cheryl Miller (Don) of Waterford, Gerald Pottmeyer of Parkersburg, Kevin Pottmeyer (Janell) of Belpre, Charlene Hoff (Tom) of Reno; 23 grandchildren, 4 step grandchildren, and 18 great grandchildren. Richard was preceded in death by his parents, brothers, Harry and Bernard Pottmeyer, sister in law, Mary Pottmeyer and 2 grandchildren, Lani Pottmeyer and Jared Hoff. Richard's family would like to thank the nurses, aides and Dr. Brockett at Heartland for taking great care of him the time he was there and would recommend Heartland for anyone needing care for a loved one. Funeral Liturgy, with Mass, will be held at St. John's at Churchtown on Monday, December 7, 2015, at 10:00 a.m., with The Rev. Virgil Reischman as celebrant. Burial will be in the church cemetery. There will be a Vigil Service on Sunday at 1:30 p.m. at the Marietta Chapel of Cawley & Peoples Funeral Home, where the family will greet friends from 1 to 3 and 6 to 8 p.m. Donations may be made to St. John's School Foundation, 17784 St. Rt. 676, Marietta, OH 45750.

Richard Louis Pottmeyer, 90, died at Heartland Nursing Home after being a resident there for 4 ½ years. He was born July 15, 1925, son of Gilbert and Aline Long Pottmeyer. He graduated from Waterford High School. He worked at Williamson Chevrolet... View Obituary & Service Information

The family of Richard Louis Pottmeyer created this Life Tributes page to make it easy to share your memories.