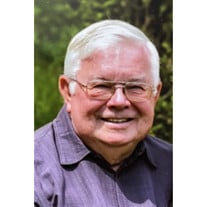 Roger Kenneth Randolph (76), of Scott Depot, WV, went home to be with the Lord on February 4, 2021 after a short illness. Roger was born in Parkersburg, WV, June 7, 1944, and was a cornerstone member of St. Francis of Assisi Catholic Church in St. Albans. He was preceded in death by parents Kenneth and Bertha Randolph, sister Sandra Deeter, brother Charles Randolph, and by many beloved aunts and uncles. He is survived by the love of his life Grace Randolph, son Aaron Randolph, daughter Trina (Scott) Grigsby, son Nathan Randolph, son Justin (Phoebe) Randolph, granddaughter Taylor (Brandon) Payne, grandson Christopher Randolph, grandson Ben Randolph, grandson Noah Randolph, grandson Austin Grigsby, great grandson Jayce Smith, great grandson Carter White, and great granddaughter Kaidence White. He is also survived by his many great friends, coworkers, his morning round table breakfast crew including Tudors' staff, and the countless others he had many great times laughing with over the course of his colorful life. Roger was a successful businessman and entrepreneur who founded Randolph Engineering with Grace out of their basement in 1976 which is renowned as one of the highest quality firms in West Virginia. He was recognized many times during his career for his philanthropic efforts which included the American Society of Civil Engineers (ASCE) Roy D. Koch award, Boy Scouts of America Buckskin Council National Quality District award, Boy Scouts of America Century Member award, Putnam County Development Authority Outstanding Service award, Putnam County Development Authority Volunteer of the Year award, Putnam County Chamber of Commerce Outstanding Service Member award, and the Putnam County Chamber of Commerce Mayo Lester Volunteer of the Year award. For almost two decades he volunteered his time for the National Rifle Association Friends of Midland Trail raising awareness and money for a cause that was dear to him. He was very proud to serve on many community boards and commissions. Those included the Putnam County Chamber of Commerce for 41 years, Putnam County Solid Waste Authority, the Putnam County Career & Technical Center, and the Board of Directors for Putnam County Bank. He truly valued the friendships of his fellow board and commission members. Roger was an avid outdoorsman who enjoyed his spare time hunting, fishing, taking his grandkids on adventures, and tending to the farm he built in Braxton County. He was always excited for the next opportunity to visit Alaska to hook the halibut of his dreams or hunting on his farm for the elusive trophy buck. He was most at ease cutting brush on one of his Massey Ferguson tractors. Spending time at the farm with the love of his life Grace and their family was his greatest joy. Roger graduated from Vincent High School and Ohio University in Athens. He never considered retiring from business because he enjoyed working too much and being around all the great people he met over a lifetime. He will be missed by his office family and those friendships of nearly half a century. Roger was a kind and honest man who never met a stranger. In Lieu of Flowers please send donations to the St. Francis of Assisi Church Building Fund located at 1023 6th Avenue, St. Albans, WV 25177. There will be a small service and internment attended by only the immediate family. Those services will be livestreamed via the Facebook page of Chapman Funeral Home. A celebration of Roger's life will occur during this coming summer so that everyone's life he touched may have an opportunity to share their mutual love and affection. Messages of sympathy and remembrance may be sent to his Tribute page at ChapmanFuneralHomes.com or at CawleyandPeoples.com. Chapman Funeral Home- family-owned and located at 3941 Teays Valley Road, Hurricane is honored to serve the Randolph family. The Lowell Chapel of Cawley & Peoples is handling local arrangements of burial in Our Lady of Mercy Cemetery in Lowell, Ohio.

Roger Kenneth Randolph (76), of Scott Depot, WV, went home to be with the Lord on February 4, 2021 after a short illness. Roger was born in Parkersburg, WV, June 7, 1944, and was a cornerstone member of St. Francis of Assisi Catholic Church... View Obituary & Service Information

The family of Roger K Randolph created this Life Tributes page to make it easy to share your memories.

Send flowers to the Randolph family.