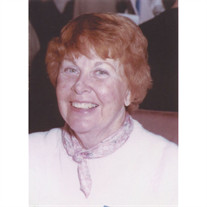 Guinness Book of Records oldest DJ, Sally Hille, dies Sally Hille, 96, of Marietta, died Thursday, December 1, 2016, at her residence. She was the daughter of Richard and Dorothy Chittenden Gramling and was born in Auburn, Indiana on April 30, 1920. She graduated from Auburn High School, and attended the Ohio State University while working at radio station WCOL in Columbus. She also worked one summer at WING in Dayton, Ohio. She started as a junior writer at WHKC in Columbus in 1946, doing on the air work and ended up being a Continuity Director. She was a member of Gateway Players with performances at the Hartman Theatre. In 1949, Sally married Richard Roy Hille, who was a well- known doctor in the Marietta area for over forty years. In Marietta, she was a pioneer in radio for women, starting with Sally's Social Corner on WMOA in 1965. Later, she had a talk interview show on WBRJ and interviewed many celebrities. This was a radio career that spanned twenty years. When she was 90, she went back into radio again for WMOA and had a program called News for Seniors for older seniors. She also did a DJ show and played music of her generation, donating her salary to various charities. In 2015, she was awarded a certificate from Guinness Book of Records as the oldest DJ in the world. And in October, 2015, she was awarded an honor for being one of the Wonder Women of West Virginia. In 2014, she was one of the Amazing Women on Channel 7 in Sarasota, Florida. Sally also wrote articles for Doll Castle News, Nutshell News, The Marietta Times and the Parkersburg News. She authored Personality Dollhouses which was sold at Campus Martius Museum and the Children's Toy and Doll Museum. She also wrote Betsy Ross, a miniature book published by Mosaic Press of Cincinnati. She was a member and president of the Women's Auxiliary to the Washington County Medical Society, 8th district director for the Ohio State Medical Auxiliary and district director for O.S.M.Z., in charge of TV and radio. Sally was a ten-year sustaining member of the Marietta Welfare League, was on the board of directors and life-time member of the Washington County Humane Society. She was the first woman on the board of the Becky Thatcher, was a board member of the Indian Summer Festival, Arts and Letters, and Women in Communication (MATRIX). She was vice president and started the Woman of the Year Award for Zonta. She was Women's Coordinator for the Bicentennial in 1975 and 1976. Mrs. Hille was also a life member of the Betsey Mills Club, Friends of the Washington County Library, Marietta Welfare League, New Matamoras Historical Society and Campus Martius Museum. She was an avid collector of toys, dolls, dollhouses, and teddy bears, but gave most of her collection to the Children's Toy and Doll Museum, which she founded in 1989. She retired from the museum in 1996, as Director Emeritus. In 2001, Dr. and Mrs. Hille sponsored the library and history room at the Children's Toy and Doll Museum, adding a collection of books for research. In 2004, she donated the rest of her collection to the museum and to the children's library at the Washington County Public Library. The other half went to Christ United Methodist Church. The Castle received her collection of bisque dolls and five miniature rooms. Her collection of costumes was given to the Mid-Ohio Valley Players. All of her scripts, tapes, and radio equipment connected with her career were given to the Marietta College Library. Her Betsy Ross collection was given to the Washington County Public Library. The Hilles, interested in preservation, gave the Archer's Fork country store and post office equipment to the Children's Toy and Doll Museum, now located at the Harmar Post Office. They also furnished a room at the Fearing House and the New Matamoras Historical Society in memory of Dr. Hille's grandparents. Mrs. Hille spent winters at King's Gate in Nolomis, Florida. She attended Christ United Methodist Church in Marietta, and the Venice Presbyterian Church in Venice, Florida. She was preceded in death by her husband, Dr. Richard Hille, in 2011, her mother and father, and brother, Marvin Gramling. She is survived by her son, Steve Hille (Wendy), daughter, Susan Rauch (John), both of Little Hocking; grandchildren, Aaron Hille (Katherine), Eric Hille, Amy Osborne (Matthew), Melissa Rauch and Matthew Rauch, and great grandchildren, Isaac, Evelyn and James Hille. Funeral Liturgy, with Mass, will be held at 10:00 a.m. on Monday, December 5, 2016, at the Basilica of Saint Mary of the Assumption, with the Rev. Msgr. John Michael Campbell as celebrant. Friends may call at the Marietta Chapel of Cawley & Peoples Funeral Home on Sunday from 4:00 to 7:00 p.m. Burial will be in Mound Cemetery. Donations in her memory may be directed to the Washington County Public Library, Mid-Ohio Valley Humane Society or a local community food pantry.

Guinness Book of Records oldest DJ, Sally Hille, dies Sally Hille, 96, of Marietta, died Thursday, December 1, 2016, at her residence. She was the daughter of Richard and Dorothy Chittenden Gramling and was born in Auburn, Indiana on April 30,... View Obituary & Service Information

The family of Sally Hille created this Life Tributes page to make it easy to share your memories.

Send flowers to the Hille family.