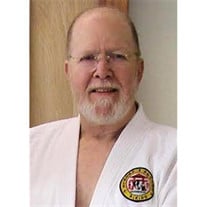 Stephen "Steve" Gegner born May 25, 1941 has gone to be with the Great Aikido Master in the sky on September 11, 2016. The big CA came and took him away but has left his family and friends with wonderful memories of a caring and giving man. Steve was born in Xenia, Ohio to Lewis and Martha Gegner from Yellow Springs, Ohio who are both deceased. He is married to Sharon and has two step children, Eric Hutsell of Marietta and Kurtis Hutsell and wife Norita; step grandson, Yutaro Kenneth Ruiz, of Richardson, TX and step granddaughter, Kelsey Hutsell, of Medford, Oregon. He graduated from Yellow Springs High school and received his architectural training at the Frank Lloyd Wright School of Architecture, Taliesin West, Phoenix, AR. Steve was a licensed architect who owned his own business, Gegner Architects, until he sold to Pickering Associates of Parkersburg and retired. He held licenses in both Ohio and West Virginia and was a member of the American Institute of Architects. He is responsible for a number of renovations of buildings along Front Street in Marietta and other projects in California, Alaska, Washington State and New York State. We don't mention the project he was involved in for the City of Marietta and a new City Hall. Ok, we will! Personal disappointment it didn't get built. But, as some know, a lot of buildings designed don't get built. His retirement enabled him to revisit his favorite pass time...Aikido, and reached the 6th degree Black Belt in Aikido and trained and taught at the Almost Heaven Dojo in Parkersburg for a number of years. He was truly dedicated to his art. He traveled with his wife, Sharon, to foreign countries where he established friendships through his association with Aikido. There will be no service at this time. Perhaps in the future there will be a celebration of life at his Dojo. Personalized, professional services provided by the Marietta Chapel of Cawley & Peoples Funeral Home. www.cawleyandpeoples.com

Stephen "Steve" Gegner born May 25, 1941 has gone to be with the Great Aikido Master in the sky on September 11, 2016. The big CA came and took him away but has left his family and friends with wonderful memories of a caring and giving man. Steve... View Obituary & Service Information

The family of Stephen Gegner created this Life Tributes page to make it easy to share your memories.

Send flowers to the Gegner family.