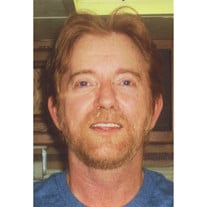 Steven Charles Seeber, 62, of Lowell, Ohio, died Friday, December 29, 2017 at his home, surrounded by his loving family. He was born on December 19, 1955 to in Swansboro, NC to Jack A. and Sue Champlin Seeber. Steve served his country in the U. S. Air Force during Vietnam. He worked for Magnum Magnetics as an electrician for many years. Steve was a avid bass fisherman, enjoyed sky diving and loved animals, especially his dogs. He was a member of the Athens County Bass Masters, Southeastern Ohio Bass Club and the American Bass Anglers. He is survived by his wife, Terry Wagner Seeber, whom he married on April 29, 2006; step son, Jarrod Merrow of Fleming, Ohio; step daughter, Amanda O'Brien of Lowell; sister, Debra Jefferson of Barstow, CA; mother in law, Wanda Wagner of Lowell; sister in law, Michele Seeber of Glouster, Ohio; grandchildren, Michael, Rachal and Dylan Merrow, and Gage, Tyler and Colton O'Brien; special friend he called his son, Dave Hamil of Athens, Ohio; special friends, Greg Hopkins, Toby Workman, Dan Beikirch and Ted Ingram; and many nieces and nephews. He was preceded in death by his parents and brothers, Jack "Allen" and Robert K. Seeber. In lieu of a Viking funeral, services will be held at 11 a.m. on Wednesday, January 3, 2018, at the Lowell Chapel of Cawley & Peoples Funeral Home, with Pastor Timothy Lindsey officiating. Full military honors will be observed as well. Visitation will be on Tuesday from 2 to 4 and 6 to 8 p.m. The family wants to thank the staff of Strecker Cancer Center, Dr. Siva, Dr. Cawley, and Marietta Home Health & Hospice, especially Karen Hill. Donations may be made in Steve's memory to The Humane Society of the Ohio Valley, 90 Mt. Tom Rd., Marietta, Ohio 45750.

Steven Charles Seeber, 62, of Lowell, Ohio, died Friday, December 29, 2017 at his home, surrounded by his loving family. He was born on December 19, 1955 to in Swansboro, NC to Jack A. and Sue Champlin Seeber. Steve served his country in the... View Obituary & Service Information

The family of Steven Charles Seeber created this Life Tributes page to make it easy to share your memories.

Send flowers to the Seeber family.