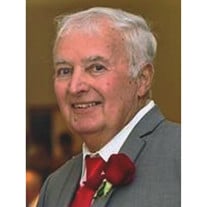 Thomas Edward Ruf, 73, of Williamstown, WV died Sunday, May 8, 2016, at Marietta Memorial Hospital. He was born October 16, 1942 in Marietta to Carl and Violet Fenton Ruf. He was a 1960 graduate of Williamstown High School and had attended WVU. He was a U.S. Army veteran of Vietnam, having served with the First Infantry Division and had received the Combat Infantryman's Badge and the Vietnam Service Medal. Tom had retired from Chevron Phillips, following 36 years of employment. He was a member of General George Post #159 American Legion in Williamstown. He was an adamant Williamstown and WVU football fan and was a founder of the Williamstown Football Club. Tom had been a crossing guard for Williamstown Schools on Highland Avenue for many years. He loved his family, which includes his wife, Linda Ritchie Ruf (married June 12, 1976), daughter, Lisa M. Ruf, of Williamstown, granddaughter, Hunter A. Smith (Adam), of Davisville, WV, nephews, Buddy Butler (Nikki) and Greg Ruf (Brenda), and niece, Susan Barengo (Jim), sister in law, Ruth Ruf ,and many other close family and friends. He was preceded in death by his brother, Joe Ruf, sister, Sally Butler, and brother in law, Charles Butler. Funeral services for Tom will be at 11:00 a.m. on Thursday, May 12, 2016, at the Marietta Chapel of Cawley & Peoples Funeral Home, with Pastor Rodney Lord officiating. Burial will be in Riverview Cemetery in Williamstown, with full military honors. Friends may call on Wednesday from 5:00 to 8:00 p.m. Donations may be made to Freedom Gate Church, 104 Tennis Center Dr., Marietta, OH 45750, Williamstown Football Club, c/o Buddy Butler, 9 Painter Crossing, Williamstown, WV 26187 or to the Williamstown Volunteer Fire Company, 411 W. 5th. St., Williamstown, WV 26187.

Thomas Edward Ruf, 73, of Williamstown, WV died Sunday, May 8, 2016, at Marietta Memorial Hospital. He was born October 16, 1942 in Marietta to Carl and Violet Fenton Ruf. He was a 1960 graduate of Williamstown High School and had attended WVU.... View Obituary & Service Information

The family of Thomas Edward Ruf created this Life Tributes page to make it easy to share your memories.

Send flowers to the Ruf family.