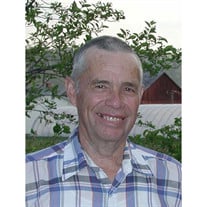 W. Wayne Worthington, 86, of Lowell, died noon Saturday, August 29, 2015, at Marietta Memorial Hospital. Born June 25, 1929 in Lowell, he was a son of the late Walter G. and Blanche Bartmess Worthington. Wayne graduated from Lowell High School, and had served in the U. S. Army during the reconstruction of France and Germany. He returned to Lowell, where he had farmed for most of his life. He had served on the Board of the Marietta Truck Growers Association. He enjoyed truck driving and traveling with his wife in their motor home. Wayne is survived by three sons, Walt Worthington (Debbie), of Marietta, Kevin Worthington (Beth), of Lowell, and Nathan Worthington (Cindy), of Lowell; nine grandchildren, Staci Ritchie (Paul), Kristi Starkey (Matt), Darrin Worthington (Megan), Jenny Worthington (fiancé Michael Paulus), Ross Worthington, Rachel Burnham (Scott), Daniel Worthington (Lacey), Ty Worthington and Jason VanClief; five greatgrandchildren, Cody, Madison, Colin, Grace and Claire; and his sister, Marjorie Worthington, of Lowell. He was preceded in death by his wife, Selma Lucille Way Worthington, whom he married November 8, 1953. Selma died February 14, 2015. Also by a grandson, Adam Worthington, and a sister, Martha Worthington. Funeral services will be held at 11:00am Wednesday, September 2, 2015, at the Lowell United Methodist Church, with Pastor Pam Lashley officiating. Burial will follow at Greenlawn Cemetery in Lowell. Wayne's family will greet friends at the Lowell Chapel of Cawley & Peoples Funeral Home on Tuesday, from 2-4 and 6-8 p.m. emorial contributions may be directed to either the Lowell United Methodist Church or the L-A Fire & Rescue. The family would like to express their gratitude to care giver Lola Sampson and to Dr. Ed Tappel for the care given to both of their parents.

The family of W. Wayne Worthington created this Life Tributes page to make it easy to share your memories.

Send flowers to the Worthington family.