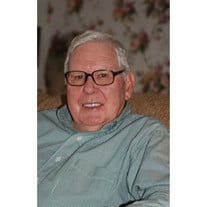 Wayne Howard Yearwood, age 88, passed away peacefully in his home on May 6, 2016 in Vincent, OH. He was one of three sons born to White Robert and Margaret Louise Yearwood on Sept. 18, 1927 in Nashville, TN. He married Bette Jo Carpenter of Hendersonville, TN in 1950. He and Bette raised four children, Joe Yearwood, wife Michele, of Covington, KY, Eve Yearwood, husband Chris Miller of Venice, FL, Dr. M. Selena Yearwood, husband Sheldon Life of Phoenix, AZ, and Andrew Yearwood of Vincent, OH. They also have five grandchildren, Reid Yearwood, Clay Yearwood, Whit Ball and Zack Yearwood. Wayne's granddaughter, Scarlett Queen, preceded him in death along with his parents and two older brothers, White Robert Jr. (Jack) Yearwood and William Anderson Yearwood. After graduating from Middle Tennessee State, Wayne worked for the American Cancer Society, then spent years working for the Boy Scouts of America. He loved to camp, boat and water ski at Old Hickory Lake and being involved with the Boy Scouts was a great fit for him. In 1964, he transferred to Parkersburg, WV to become the executive director of the Girl Scouts of America. A year later, after purchasing many acres of land in Vincent, OH and having a house built, moved his family there and enjoyed the spaciousness of the land. Wayne loved the beauty of the trees in the vast woods and the sparkling water in the pond. They had a large garden, raised calves, pigs, a pony along with many dogs and cats and a crow. He loved boating and his family and friends spent many summer days water skiing on the Muskingum and Ohio Rivers. Wayne began his teaching career at Warren High School teaching biology and coaching basketball which he played and excelled at in high school. After receiving his Master's Degree in Education from Ohio University, he switched to elementary education teaching at Bartlett Elementary and later at Little Hocking Elementary. He enjoyed his students very much and loved sharing history lessons with them. He was also an advocate for teachers' rights. During the summers and after retirement Wayne's love of history compelled him and Bette to travel extensively around Europe and many other countries abroad and many to places in the US. He loved musicals and theater and had the record soundtracks of many of the popular and current musicals which were playing frequently in the home. He also had a little radio on while he worked. Wayne and Bette had a sweet little place in Englewood, FL where they spent a couple of months each winter to enjoy the beach, ocean and warm weather--three other of Wayne's great loves. Wayne was an active member of Layman Methodist Church where the family still attends and he also later attended Veto Presbyterian Church. He will be remembered by those who knew him and shared his love for history, travel, sunny days, music, boats, lakes and oceans. He will be resting in heaven hearing the song from the musical Oklahoma, "Oh What A Beautiful Morning" while listening to the waves crash on the beach...And we will always love and think of him. Funeral services will be on Wednesday, May 11, 2016 at 12 p.m. at the Barlow Chapel of Cawley & Peoples Funeral Home. Burial will follow in Barlow Central Cemetery. Visitation will be on Tuesday evening from 5 to 7 p.m. at the funeral home and for one hour prior to the services on Wednesday.

Wayne Howard Yearwood, age 88, passed away peacefully in his home on May 6, 2016 in Vincent, OH. He was one of three sons born to White Robert and Margaret Louise Yearwood on Sept. 18, 1927 in Nashville, TN. He married Bette Jo Carpenter of... View Obituary & Service Information

The family of Wayne Howard Yearwood created this Life Tributes page to make it easy to share your memories.

Wayne Howard Yearwood, age 88, passed away peacefully in his...

Send flowers to the Yearwood family.