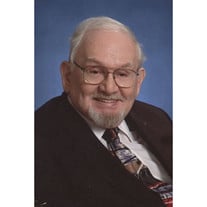 William James "Jim" North, Jr, 82, of Marietta, was comforted by his family and caregivers, as he was promoted to glory on Wednesday, April 19, 2017 at Marietta Center in Marietta, Ohio. He was born on December 7, 1934 in Upland, PA, to Thelma Tanley and William James North, Sr. Jim graduated from The Salvation Army Training College in New York City in 1957. He married fellow Salvationist, Lois Jean Rought, on June 21, 1958. Together they served 20 years of ministry, including a five year term as missionaries in East Africa. Jim retired from Peoples Bank where he enjoyed a career as a teller. He was known throughout the Marietta church community. Jim was a member of the First Baptist Church in Marietta and more recently a member of the First Presbyterian Church in Marietta. Jim loved the Lord, he proudly sang and played trombone in The Salvation Army Staff Band, shared in music ministry, Bible study, and fellowship with others. He is survived by four daughters, Brenda North of Marietta, Beth Sour (Peter) of Marietta, Barbara North-Moss (Eric Moss) of Athens, Ohio, and Beverly North-Garvin (James Garvin) of Cincinnati, Ohio; and five grandchildren, Carolyn Sour, William McAtee, Jr, Gwendolyn Sour, William W. Garvin and Aidan Garvin. Jim was preceded in death by his parents, his wife Lois Rought North, and sister, Nancy North. The North Family would like to sincerely thank the staff of Interim Health Care, Marietta Center, and Amedisys Hospice for the compassionate care they provided to Jim. Friends & family may call from 5-7 PM Friday, April 21st at the Marietta Chapel of Cawley & Peoples Funeral Home, 408 Front Street. Marietta, Ohio. Funeral Service will be 2:00 pm Saturday, April 22nd with 1 hour prior visitation at the First Presbyterian Church 4th & Wooster Streets, Marietta with The Reverend David Smith officiating. Burial will follow in East Lawn Memorial Park. Cawley & Peoples is honored to serve the North family, and offers many resources by visiting their website, www.cawleyandpeoples.com

William James "Jim" North, Jr, 82, of Marietta, was comforted by his family and caregivers, as he was promoted to glory on Wednesday, April 19, 2017 at Marietta Center in Marietta, Ohio. He was born on December 7, 1934 in Upland, PA, to Thelma... View Obituary & Service Information

The family of William James North created this Life Tributes page to make it easy to share your memories.

Send flowers to the North family.