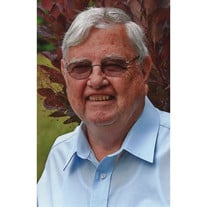 William George "Bill" Ormiston, 83, of Belpre, formerly of Fleming, died Friday, May 20, 2016 at his residence. He was born on February 14, 1933 in Marietta, Ohio, to the late Oliver and Carol Freese Ormiston. Bill was a graduate of Bartlett High School, and obtained his Master's Degree in Chemical Engineering from Case Western, following his time at Marietta College. He retired from Union Carbide/Elkem/Eramet as a Chemical Engineer and Assistant Plant Manager. For a period of time, he worked in Niagara Falls, before he was transferred back to Marietta. While in Niagara Falls, he was President of the Lewiston-Porter School Board, and was an assistant football coach for little league for years. Bill was an Eagle Scout, taught at Washington State Community College, a member of Jaycees, Marietta Chamber of Commerce, Belpre Lions, Bartlett Masonic Lodge #293, and served on the Marietta Memorial Hospital Board. He loved attending all of his grandson's football, baseball, and basketball games. He is survived by his wife, Shirley Lawton Ormiston, whom he married on June 16, 1957, two children, Dave Ormiston (Emily) of Clearwater, FL, and Sharon Robertson (Keith) of Fleming, Ohio, and four grandsons, Allen Thompson (Devyn), Levi Thompson, and Bryer and Kaden Robertson. Funeral services will be held at 11:00 a.m. on Tuesday, May 24, 2016 at the Barlow Chapel of Cawley & Peoples Funeral Home, with Dr. Lloyd Dennis officiating. Burial will follow in Barlow Central Cemetery. Visitation will be on Monday, from 5-8 p.m. and for one hour prior to the services on Tuesday at the funeral home. Masonic services will be held at 7:30 p.m. Monday evening at the funeral home. Donations may be directed to the Humane Society of the Ohio Valley, P.O. Box 5, Marietta, Ohio 45750.

William George "Bill" Ormiston, 83, of Belpre, formerly of Fleming, died Friday, May 20, 2016 at his residence. He was born on February 14, 1933 in Marietta, Ohio, to the late Oliver and Carol Freese Ormiston. Bill was a graduate of Bartlett... View Obituary & Service Information

The family of William George Ormiston created this Life Tributes page to make it easy to share your memories.

Send flowers to the Ormiston family.