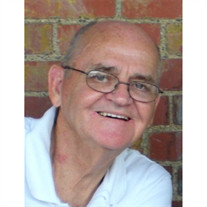 Al Schneider, age 78, passed away peacefully at his home and surrounded by family on Monday (January 12, 2015) following an illness from colon cancer. Al is survived by his two sons, by previous marriage to Marna Jean Adamson now residing Columbus, Ohio, and their families: Jon married to Kelli Cawley residing in Marietta, and Curt married to Jennifer Haupt with their daughters Ashley and Kristyn residing in Houston, Texas. Al was also previously married to Carolyn Sue Jeffers. He was born on November 7, 1936 in St. Clairsville, Ohio to Alfred Herman Schneider and Bertha May Arnold . Following the passing of his mother in 1937, he was raised by his maternal grandmother Charlotte "Lottie" Arnold and his maternal aunt Hazel (Edward) Dittmore and with their children Martha Lee (Tom) Tominak and Mary Jane (Phil) Bentz in Wheeling, West Virginia. Al was a graduate of St. Clairsville High School. He served in the United States Air Force from 1955 to 1959 stationed at the Dyess Air Force Base in Abilene, Texas. Following the service, he worked in the Marietta area including starting his own business, Tri-State Industrial Pipe, and subsequently retired from the US Gov't Bureau of Public Debt. Al was a lifetime athlete excelling in football, baseball, and basketball and enjoyed watching sports. Al was generous and active supporting the Marietta community, most notably the Boys and Girls Club as a board member and volunteer, as well as the Marietta Rowing and Cycling Club and efforts in developing the riverfront bike path. A memorial service will be held at 10:00 am Saturday, January 17th at the Marietta Chapel of Cawley & Peoples Funeral Home, 408 Front Street, Marietta, Ohio, followed by time to meet with the family. An informal reception will also be held for Al's friends and family from 3:00 pm to 6:00 pm at the Adelphia Music Hall, 205 2nd Street, Marietta, Ohio. Memorial donations, in lieu of flowers, can be sent in Al's honor to the Cynthia Summers Fund for the Boys and Girls Club of Washington County ? The Marietta Community Foundation, P.O. Box 77, Marietta, Ohio 45750, 740-373-3286, or www.mcfohio.org

Al Schneider, age 78, passed away peacefully at his home and surrounded by family on Monday (January 12, 2015) following an illness from colon cancer. Al is survived by his two sons, by previous marriage to Marna Jean Adamson now residing... View Obituary & Service Information

The family of Alfred Schneider created this Life Tributes page to make it easy to share your memories.

Al Schneider, age 78, passed away peacefully at his home and...

Send flowers to the Schneider family.