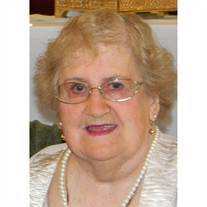 Alice Louella Lang, 93, of Churchtown, went to be with our Lord on Wednesday December 5, 2018 at Elmcroft of Marietta, after a good long life. She was born April 13, 1925, in Marietta to the late Raymond and Elizabeth Schilling Arnold. Alice went to High Hill or Union School near Lane's Fruit Farm for 8 years and then on to Marietta High School where she graduated in 1943. She worked at the propeller division at Remington Rand from 1943 to 1945 making airplane parts for World War II. After that time, she then moved to the division that made Kardex pockets until 1947. Alice married Vincent Lang on June 24, 1948, who preceded her in death on March 28, 2014. They made their home in Churchtown where they had a dairy farm and truck farming. In 1976, Alice started to work in the cafeteria at B. F. Goodrich where she worked as a cook until her retirement in 1990. She was a lifelong member of the St. John the Baptist Church in Churchtown where she was a member of the Catholic Women's Club, a Eucharistic Minister and a member of the Senior Citizens. Alice was a 4-H advisor and she also cooked at Camp Hervida for several summers, was a member of the American Legion Auxiliary 750 of Lowell, O'Neill Senior Citizens and she belonged to several card clubs and loved to crochet, making capes, tree skirts, shawls for the church ministry, and afghans. Alice liked to camp and travel, and especially enjoyed her family and friends. She is survived by her seven children, Dennis (Sharon) of Whipple, Peggy (Robert E. Byers) of Marietta, Vicky Boley (John Boley, Jr.) of Whipple, Al (Jeanne) of Marietta, Stan of Churchtown, Tony (Gail) of Marietta, and Betsy Lang of Churchtown; 20 grandchildren, Jason, Mark, Hannah, Aaron, Ben, Dwight, Garrett, Keith, Scott, and Shannon Lang, Melissa Canavan, David and Elizabeth Byers, Matt, Brandon and Ryan Boley, Ashly Wells, Christopher and Michael Hinchee, and Vicky Nay; 40 great-grandchildren, Jennessa, Jassandra, Jacob, Emma, Destiny, Andrew, Mollie, Braxten, Colsen, Ella, Haven, Isabelle, Hudson, Sydney, Jadelynn, Gwendolyn, Marcus and Mylee Lang, Kayley Cox, Zane, Keegan, Connor, Branson, and Kallie Rose Boley, Madison, Mason and Alaina Wells, Carly, Devon, Olivia, Colten and Maggie Canavan, McKenzie Wright, Audrey and Nora Hinchee, Leighton and Lyla Byers, Alex, Kaylin and Abigail Ruble; and many nieces and nephews. She was preceded in death by her parents; husband; brothers, Mark, Dan and Ambrose Arnold; sisters, Audrey Lang and Margaret Schaad; and grandchild, Austin Lang. Funeral Liturgy with Mass will be held at St. John's Catholic Church at 10:00 a.m. on Monday, December 10, 2018 with The Rev. Timothy Davison celebrating. Burial will follow in the Church Cemetery. Visitation will be at the Marietta Chapel of Cawley & Peoples Funeral Home on Sunday from 2 to 8 p.m., where a Rosary and Vigil service will be held at 3:00 p.m. Donations may be made to St. John the Baptist Church or St. John School Foundation.

Alice Louella Lang, 93, of Churchtown, went to be with our Lord on Wednesday December 5, 2018 at Elmcroft of Marietta, after a good long life. She was born April 13, 1925, in Marietta to the late Raymond and Elizabeth Schilling Arnold. Alice... View Obituary & Service Information

The family of Alice Louella Lang created this Life Tributes page to make it easy to share your memories.

Alice Louella Lang, 93, of Churchtown, went to be with our Lord...