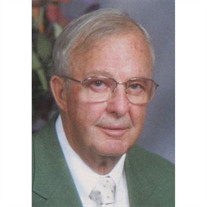 Clarence Elwin "Clete" Simpson, 89, of Marietta, died Tuesday, April 15, 2014, at Camden Clark Medical Center, Parkersburg, WV. He was born July 23, 1924 in Williamsport, PA to Clarence Elwin and Mildred A. Throne Simpson. He was a graduate of South Williamsport High School and a 1949 graduate of Penn State, with a BS degree in Chemical Engineering. Clete was a U.S. Army veteran of World War II, having participated in the Battle of the Bulge. He had worked at U.S. Rubber from 1949 to 1956, Union Carbide from 1956 until his retirement in 1985, and then spent many years volunteering at St. Mary's Catholic Church, his proudest achievement having been setting up their computer systems. Clete was a member of The Basilica of St. Mary of the Assumption, was a 4th degree Knight in the K of C, and member of the St. Vincent de Paul Society. He also was a member of American Legion, Post #64, Moose Lodge #1823, Marietta Country Club and past member of the Elks. He was an avid golfer who golfed to the end of his life. Pop and Poppy dearly loved his grandchildren and they, him. His kindness and sense of humor will be missed by all his family, friends and many acquaintances. Clete is survived by three daughters, Christine Perla (Randall) of Westlake, OH, Ann Simpson of Cromwell, CT, Colette Pawlik (Joseph) of Aurora, OH, two sons, Thomas (Linda) of Vienna, WV and Richard (Deb) of Hilliard, seven grandchildren, Emily, Michael, Megan, Elizabeth, David, Alex and Catherine, five great grandchildren, Amy, Avery, Logan, Meir and Liora, as well as many nieces and nephews. He was preceded in death by his wife, Cecelia Louise Goldy Simpson in 1999, two brothers, Dunbar and Leroy and a sister, Evelyn Williams. His funeral service will be at 10:00 a.m. on Friday, April 18, 2014, at The Basilica of St. Mary of the Assumption, with the Rev. Msgr. John Michael Campbell officiating. Friends may call at the Marietta Chapel of Cawley & Peoples Funeral on Thursday from 2 to 4 and 6 to 8 p.m. Burial will be in New St. Mary's Cemetery, with full military honors. Donations to St. Mary's School Foundation, 504 Fourth St., Marietta, OH 45750.

The family of Clarence Elwin Simpson created this Life Tributes page to make it easy to share your memories.

Send flowers to the Simpson family.