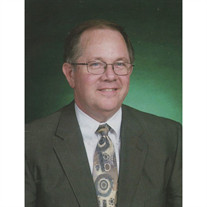 The Reverend James Craig Butler, 67, of Marietta, died Sunday, December 3, 2017 at Marietta Memorial Hospital. He was born December 18, 1949 in Chicago, Illinois, to John Edward and Patricia Ann Okell Butler. He earned a BA degree in religion from Wofford College, and completed a Master of Divinity at Louisville Theological Seminary (Kentucky). He served churches in Monroe and Huntersville, NC; and Marietta and New Concord, OH. He served and retired as Associate Presbyter of the Presbytery of West Virginia. He had attended First Presbyterian Church in Williamstown, WV. Craig had been a member of Rotary Club of Marietta and Civitan. He loved music, singing and playing guitar, and he enjoyed cooking. Craig is survived by his wife, the former Caroline Daumer, whom he married on October 19, 1991. He is also survived by his mother, of Laurinburg, NC, his sister Betty Allen (David) of Longwood, FL; and brother Rick of Knightville, NC. Craig is survived by many cousins, nieces, and nephews. He was preceded in death by his father. Memorial Service will be at 1 pm on Wednesday, December 6, 2017 at First Congregational United Church of Christ, 318 Front Street, Marietta, with the Rev. Elizabeth Campbell-Maleke, the Rev. Linda N. Steelman, and Pastor Lou Whitney officiating. Visitation will be on Tuesday, 6-8 pm at the Marietta Chapel of Cawley & Peoples Funeral Home, and for one hour prior to the service at the church on Wednesday. Donations may be made in Craig's memory to First Presbyterian Church, Williamstown, WV, or to Presbyterian Disaster Assistance. Cawley & Peoples offers online condolences and other resources, by visitingwww.CawleyandPeoples.com.

The family of Craig Butler created this Life Tributes page to make it easy to share your memories.

Send flowers to the Butler family.