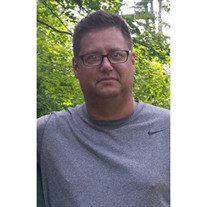 David Glenn Wolfe, 49, passed away April 27, 2017, at his home in Marietta, OH. He leaves behind his wife of 28 years, Valerie (Pine) Wolfe and three sons: Barry (Haley) Wolfe of Marietta, OH, Benjamin Wolfe of Vienna, WV, and Joel Wolfe of New York, NY, one granddaughter who was the apple of his eye, Rhiannon Wolfe (Barry and Haley's daughter) of Marietta, OH. He also leaves his parents, James and Ida (Williams) Wolfe of Williamstown, WV, brother Tim (Robbi) Wolfe of Williamstown, WV, sister Dee (Norris) Jones of Parkersburg, WV, sister Mary Beth (Kelly) Shultz of Mineral Wells, WV and many beloved nieces, nephews and extended family and friends who will dearly miss him. He was preceded in death by two brothers, Barry James Wolfe and Steven Keith Wolfe. David was born in Parkersburg, WV on February 13, 1968 and graduated from Williamstown High School in the Class of 1986. He also attended Ohio Valley University in Vienna, WV and David Lipscomb University of Nashville, TN. He served in the U.S. Air Force from 1989 to 1997. He worked 12 years as a Chemical Operator and Supervisor at Americas Styrenics in Marietta, OH and 6 years as a Supervisor and General Foreman at Eastman Chemical Plant in Monongahela, PA. He also owned and operated Ohio Valley Roof Cleaning in Williamstown, WV and, with his sons, owned and operated Wolfe Brothers Auto in Marietta, OH. He also loved Jesus and ministered with Point to Hope Ministries of Alaska. He was a state champion in track at Williamstown High School and an accomplished basketball player in high school and college and was an excellent and avid golfer, bowler and loved shooting guns, playing guitar, spending time with family and friends at the family campground, and watching the Pittsburgh Steelers with dear friends and family. He was beloved by all who knew him and had a generous and giving heart. He will be dearly missed by all. Visitation is at the Marietta Chapel of Cawley & Peoples Funeral Home on Front St. in Marietta on Monday from 2-4 and 6-8 p.m. Funeral services will be held on Tuesday, May 2, 2017 at 11:00 a.m. at the funeral home.

The family of David Glenn Wolfe created this Life Tributes page to make it easy to share your memories.

Send flowers to the Wolfe family.