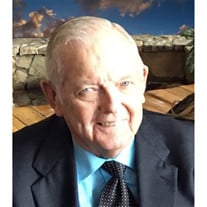 Donald Paul Britton, 81, of Marietta (formerly of Vincent), passed away March 24, 2019 at Cedar Park, Texas following a short illness. Don was born Sept. 13, 1937 in Marietta to William Harold and Ruth Hilda (Mueller) Britton. His early childhood was spent on the Britton Dairy farm near Cedar Narrows and later along Rt 821 near Unionville. He graduated from Marietta High School in 1955 and worked at the Airolite Company before retiring from Shell Chemical Company in Belpre after 26 years. He is survived by his wife, Sherry L. (McKnight) Britton, whom he married on Nov. 11, 1963 in Hendersonville, NC. On Dec. 28, 2001 Sherry donated her kidney to him and they were able to enjoy another 17 wonderful years together. Don is survived by his children Roger Britton (Annie) of Houston, TX, Angie Lewis of Marietta, and Scott Britton of Marietta, grandchildren Melissa Kuchar, Brian Chamblee, Katrina Chamblee, Amanda Jenkins, Bethany Reiter, and Tori Lewis, great-grandchildren Millicent Kuchar, Annabell Reiter, and Augustus Reiter. Also surviving is his brother Richard Britton (Jean) of Three Rivers, MI. He was preceded in death by his parents. The family would like to thank Dr. Raul Hernandez of Zanesville and the Ohio State University Transplant Center for the wonderful care they gave him. In lieu of flowers, the family requests that any memorial donations be made to Lifeline of Ohio or a charity of your choice. Abiding with Don's wishes, he will be cremated and there will be no visitation. A family graveside service will be held at Oak Grove Cemetery at a future date.

The family of Donald Paul Britton created this Life Tributes page to make it easy to share your memories.

Send flowers to the Britton family.