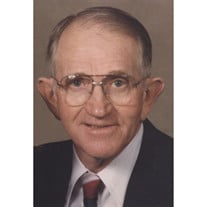 Edward T. ("Jake") Schoeppner died at his home Monday, December 1st, 2014. He was 94 years old. Jake was born on March 23rd, 1920 to Rose (Estadt) and Edward Schoeppner in Hariettsville, Ohio. He was the sixth of seven children. He was preceded in death by his brothers Clarence, Elmer, Harold, and Sam, and sister, Thelma. One brother survives, John (Ethel), of Marietta. Jake graduated from Elk Local High School in 1937. Jake served in the Navy in the South Pacific during World War II. He earned four bronze stars for Luzon, Iwo Jima, Okinawa Gunto, and Japanese Homeland. He was on board the closest escort destroyer,USS Kalk, in Tokyo Bay during the signing of the surrender treaty on VJ Day. After the war, Jake was employed at Marietta Concrete and Remington Rand, from which he retired in 1984. He served as mayor of Lower Salem and on the Fort Frye School Board. Jake loved sports and played baseball and fast pitch softball well into his 40's. He coached in many youth leagues, including Marietta Bantam and Lowell Legion teams. He also played golf after his retirement. He loved to play cards and was in bowling leagues for many years. Jake is survived by his wife, Betty L. Fulton, whom he married on September 3rd, 1949. They had six children together, Teresa (Steve) Porter of Marietta, Martha (Mike) Tanner of Columbus, Helen (deceased), Thomas (Candis) of Marietta, David (Maria) of Cincinnati, and Debra (Jim) Houser of Buffalo. Jake and Betty have 13 grandchildren, Chris (Darcie) and Todd (Sara) Porter, Kelly Glaser Birkas (Chad) and Jill Glaser Grass (Barak), Elizabeth, Danny, Nicholas, and Sarah Schoeppner, William, Jacob, and Stephanie Houser, Patrick and Catherine Schoeppner. They also have seven great grandchildren. Jake was also preceded in death by his first wife, Maria (Huffman) and their two children, Eddie and Kay. Funeral Liturgy, with Mass, will be held at The Basilica of St. Mary of the Assumption on Saturday, December 6, 2014, at 10:00 a.m. Friends may call at the Marietta Chapel of Cawley & Peoples Funeral Home on Friday from 2 to 4 and 6 to 8 p.m., where there will be a Vigil Service at 3:00 p.m. Burial, with full military honors, will be in Salem Township Cemetery.

Edward T. ("Jake") Schoeppner died at his home Monday, December 1st, 2014. He was 94 years old. Jake was born on March 23rd, 1920 to Rose (Estadt) and Edward Schoeppner in Hariettsville, Ohio. He was the sixth of seven children. He was preceded... View Obituary & Service Information

The family of Edward Thomas Schoeppner created this Life Tributes page to make it easy to share your memories.

Send flowers to the Schoeppner family.