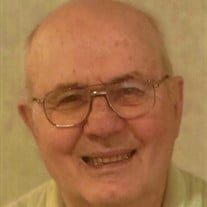 Francis George “Frank” Schilling, 83, of Marietta, Ohio, died on Sunday, April 25, 2021 at Marietta Memorial Hospital. He was born on January 18, 1938 in Churchtown, Ohio, to Francis A. and Louise E. Lang Schilling. Frank was a 1956 graduate of Marietta High School. He served his country in the U.S. Army during the Berlin Crisis. Frank retired from AEP, Muskingum River Plant in 1997 as a machinist and was a lifelong farmer. He was a member of St. John the Baptist Catholic Church, Knights of Columbus, 4617, where he was a 4th Degree Knight, American Legion Post #750 in Lowell, Churchtown Senior Citizens, Holy Name Society and Honey Bee Association. He is survived by his wife, Gladys Ellen Brooker Schilling, whom he married on October 14, 1959; three daughters, Melinda Treadway (Jerry) of Marietta, Patricia Finkel of Marietta and Trina Poythress (Dean) of Harrisburg, NC; five sons, Neil (Donna) of Marietta, Philip (Julie) of Findlay, OH, Troy (Teresa) of Marietta, Randy (Jessica) of Chillicothe, OH and Rodney (Erin) of New Marshfield, OH; 17 grandchildren, Tracie Roush (Jesse), Madalyn Treadway, Nicholas and Benjamin Finkel, Evan, McCaul and Brennan Schilling, Alexandria and Daniel Schilling, Taryn and Turner Schilling, Kendall and Landon Poythress, Travis and Samual Schilling, Edwin and Grace Schilling; 7 step grandchildren; 3 great grandchildren, one sister, Gertrude Bradley; two brothers, Norbert (Sheila) Schilling and Kenneth (Janet) Schilling; and many nieces and nephews as well as his faithful dog Wendy. He was preceded in death by three sisters, Janice Schilling, Dorothy Rauch and Ruth Rauch and brother, Carl Schilling. Funeral Liturgy with Mass will be held at 10:00 a.m. on Friday, April 30, 2021 at St. John’s Catholic Church in Churchtown, with The Rev. David Gaydosik celebrating. Burial will follow in the church cemetery, with full military honors. Visitation will be on Thursday from 2 to 8 p.m. at the Marietta Chapel of Cawley & Peoples Funeral Home, with a Rosary prayed at 7:00 p.m. Masks will be required and social distancing will be observed. Donations may be made in Frank’s memory to St. John’s School Foundation, 17654 St. Rt. 676 or Marietta Home & Hospice, 450 Pike Street, both in Marietta, Ohio 45750. The Schilling family would like to give a special thanks to Dr. Kelli Cawley and the Strecker Cancer Center. Cawley & Peoples is honored to serve Frank’s family and offers online condolences as well as many other resources by visiting their website, CawleyandPeoples.com.

The family of Francis George Schilling created this Life Tributes page to make it easy to share your memories.

Send flowers to the Schilling family.