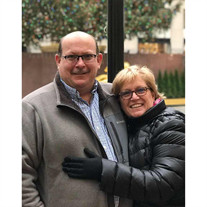 It is with much regret and many heavy hearts that family announce the passing of James "Jim" David Parker, 52, of Williamstown, WV on December 1, 2020. Jim lived a full life that was cut much too short, as he succumbed to complications from... View Obituary & Service Information

The family of James David Parker created this Life Tributes page to make it easy to share your memories.

It is with much regret and many heavy hearts that family announce...

Send flowers to the Parker family.