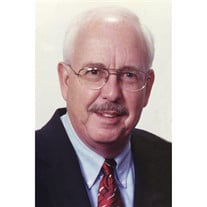 Dr. John Michel, a distinguished professor emeritus of mathematics at Marietta College died in Marietta on Tuesday, May 15, 2018. He was 78. The cause of death was pancreatic cancer, which was diagnosed in February. Dr. Michel joined the faculty at Marietta College in 1970 while he was completing his Ph.D. degree from the University of Wisconsin. He became Chair of the Department of Mathematics serving for nine years, where he wrote the National Science Foundation grant that helped fund computers and software for the department's first calculus computer labs. He was twice selected as a Harness Fellow, awarded on the basis of excellence in teaching. His many and diverse contributions to the college were formally recognized when he received the Marietta College Service Award in 2002. He retired from the college in 2004. The Mathematical Association of America recognized Dr. Michel as its 2009 recipient of the Certificate of Meritorious Service. For the state of Ohio, he served as Secretary-Treasurer (two terms), as Chair of the Program Committee, and as Section President. For three years, he was one of the coordinators of the Ohio NExT program for new faculty. In the middle 1960's, Dr. Michel worked at NASA's Jet Propulsion Laboratory (JPL) in Pasadena, California on the first Mars flyby mission. For over twenty years, he worked as a consultant at JPL during the summers, working on the Galileo mission to Jupiter, the Cassini mission to Saturn, and the Mars 2003 Lander/Rover Mission. His group charted the course for several deep space probes, including the Voyager missions that have now left our solar system. Perhaps their most daunting assignment was the Galileo mission to Jupiter. After the Challenger tragedy, the launch vehicle was downgraded to a less powerful rocket. That prompted Dr. Michel's team to come up with a creative course to get the probe to Jupiter. It was launched in the wrong direction towards Venus, where it circled the planet picking up a gravity assist. Passing Earth again, it received an additional gravity assist reaching Jupiter in 1995 after a six-year voyage. They received the NASA Group Achievement Award for this creative solution. Dr. Michel grew up in Cape Girardeau, Missouri, on the Mississippi River, a town similar to Marietta. Both his parents were mathematics educators, his mother a teacher in the public schools and his father a professor at the state university. He was an outstanding student in high school and a star on the basketball court, scoring 38 points in one varsity game. He received his B. A. degree from the University of Missouri, before moving on to the University of Wisconsin, where he received his masters and doctorate in mathematics. In retirement, Dr. Michel enjoyed playing tennis and socializing with friends in Marietta. Dr. Michel volunteered as an instructor for Space Camp, a youth 4-H summer science program at Marietta College. He was an avid movie buff, and taught several Learning in Retirement classes on film at Marietta College. While working at the Jet Propulsion Laboratory in southern California he met the love of his life, Kay Tilley, a public-school teacher from Columbus, Ohio. They married in 1965 and became the parents of twins in 1969. A year later they moved to Marietta, eventually settling in a 1905 Victorian home across from Mound Cemetery. Kay spent 29 years as a public-school teacher, and their children, Jenny and Jeff, attended public schools in Marietta. The family spent many summers in southern California, while Dr. Michel was working at the Jet Propulsion Laboratory. The Michel's were married for 52 years. Dr. Michel was preceded in death by his daughter, Jennifer Keefer. She was a young wife and mother with a career in fine arts public relations. She died of cancer at age 33, leaving behind two small children. His parents, Russell and Elnora Michel, also preceded his death. He is survived by his wife Kay of Marietta; his son Jeff and wife Deniz of Richmond, Virginia; two grandchildren, Ellie and Hank Keefer of Columbus, and their parents Tony and Julie Keefer, also of Columbus; and his brother Mark Michel of Albuquerque, New Mexico. He is also survived by many brothers and sisters in law, nieces and nephews. A Celebration of Life will be held for Dr. Michel in the Great Room in Andrews Hall at Marietta College on Saturday, June 30, 2018 at 2 p.m. The family will be hosting a reception immediately following the service. The Michel Family is in the process of establishing the John and Katharine Michel Fund for Mathematics at Marietta College. In lieu of flowers, contributions in John's memory should be directed to the: John and Katharine Michel Fund for Mathematics, c/o Marietta College Office of Advancement, 215 Fifth Street, Marietta, Ohio 45750. Contributions are tax deductible. It is also possible to contribute by donating in memory of Dr. Michel at https://marietta.edu/give, designating the fund.

Dr. John Michel, a distinguished professor emeritus of mathematics at Marietta College died in Marietta on Tuesday, May 15, 2018. He was 78. The cause of death was pancreatic cancer, which was diagnosed in February. Dr. Michel joined the faculty... View Obituary & Service Information

The family of John Russell Michel created this Life Tributes page to make it easy to share your memories.

Send flowers to the Michel family.