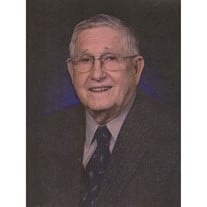 Lewis E. Simmons passed from this life November 25, 2019 surrounded by family. He was a resident at Elmcroft of Marietta. Lewis was born October 12, 1929 to Charles C. Simmons and Elizabeth Cline Simmons in the Valley neighborhood of Reno, where he would live all of his life. He attended Sand Hill School and graduated from Marietta High School, Class of 1948. Lewis started work in the truck gardens in Reno then went to August Webers Grocery and a glass company on Scammel Street before he began work at Remington Rand. When Union Carbide opened, he was called in the first round of employees. He retired from the Union Carbide Energizer plant after the fire there in the 1980's. After retirement Lewis enjoyed driving for car dealerships in the area. Lewis enjoyed hunting, fishing, traveling and played in the Old Timer Softball league for several years. He enjoyed playing cards and games - and loved to win. He was a lifetime member of Reno Christian Church, serving over the years as a Sunday School Superintendent and Deacon. He had also attended Sandhill United Methodist Church in his later years. Lewis was a charter member of the Reno Fire Department and drove squad for many years. He was preceded in death by his first wife, Mary M. Seevers and is survived by their five children: Teresa (Kenneth) Eddy, Charles (Jennifer) Simmons, Ann Simmons, Mary Walker, and Matthew (Kris) Simmons, all of the Marietta area. Grandchildren: Mary Ann Ware, Bradley Scott (Stacey) Eddy, Darren Simmons, Alaina (Daniel) Haught, Christian Ullman, Austin Walker, Sarah (Josh) Haletek, and Anna (Ryan) Haugh. Great grandchildren: Ethan Eddy, Aidan Eddy, Benton Haugh, Gavin and Carson Ware. Also surviving is his wife, Agnes Pape Simmons, step-daughters Andra (Matt) Hinson and Alice (Jeff) Wriston, and step-granddaughters, Luanna and Betsy Wriston. Besides his parents, he was preceded in death by sisters Betty (John) Mendenhall and Maxine (Chester) Zimmer, and one brother, Charles Simmons, Jr. who passed in service to his country during World War II in the Phillipines. Visitation will be at Cawley & Peoples Funeral Home, Marietta, Friday, November 29th from 2:00 to 4:00 p.m. and 6:00 to 8:00 p.m. Funeral services will be Saturday, November 30th at Reno Christian Church, State Route 7 in Reno, at 2:00 p.m. with visitation one hour before service. In lieu of flowers memorial gifts can be made to the Reno Volunteer Fire Department or Marietta Home Health and Hospice.

Lewis E. Simmons passed from this life November 25, 2019 surrounded by family. He was a resident at Elmcroft of Marietta. Lewis was born October 12, 1929 to Charles C. Simmons and Elizabeth Cline Simmons in the Valley neighborhood of Reno, where... View Obituary & Service Information

The family of Lewis Elmer Simmons created this Life Tributes page to make it easy to share your memories.

Send flowers to the Simmons family.