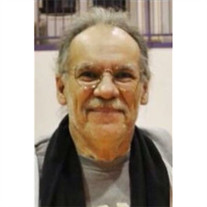 Michael H. Scott, age 67, passed away of natural causes on August 8, 2017 at his home in Marietta, Ohio. Michael was born on October 26, 1949 to Paul and Mary Ann Skotynsky. Formerly of North Toledo, Ohio, Michael graduated from Woodward High School in 1967, Shortly after attending Ohio State University, Michael was drafted into the US Army serving two years at the NCO Academy on overseas assignments between 1970-1972. At his time he changed his last name from Skotynsky to Scott. After his honorable military discharge, Michael attended Oxford University School in architectural planning in England. While he was at Oxford, he wanted to expand his knowledge to England's unique building architectures. Michael completed his Ohio State University courses and graduated in 1979 with a Bachelor of Science degree in Architecture. After his schooling, Michael moved to Marietta, Ohio, where he worked as a project manager in 1979 for Allen R. Carney, Architect and Land Planning. He was later promoted to an associates position. Michael had experience in building renovations, design, and construction. Later in his career, he established his own architectural business specializing in home and commercial revitalizations. Michael was a registered architect in Ohio and West Virginia and a member of the American Institute of Architects. Michael enjoyed seeing his architectural designs come to fruition. For leisure, Michael enjoyed watching his daughter Bridge grow into a beautiful, mature, young lady. He also spent funtime fishing in the Atlantic ocean with his buddy Gary and project time with his friend Steve. Michael's parents, Paul and Mary Ann Skotynsky (Wulczak), preceded him in death. He is survived by his loving daughter Bridge Marie Scott, brothers Paul Skotynsky (Marilyn) and Matthew Skotynsky (Lea), aunt Catherine Nazark, and friends Becky Scott, Steve Westfall and Gary Hontz, and numerous cousins, nieces, and nephews. A celebration of his life will be held at 12:00 p.m. on Monday, August 14, 2017 at the Marietta Shrine Club, 249 Pennsylvania Ave, Marietta, Ohio. Family will greet friends there from 10:30 a.m. until time of services, with a luncheon following. His ashes will be buried at a later time at Calvary Cemetery in Toledo, OH. Donations can be made to Bridge Scott College Fund, c/o Matt Skotynsky, 213 Louisiana Ave, Perrysburg, OH 43551.

The family of Michael Harry Scott created this Life Tributes page to make it easy to share your memories.

Send flowers to the Scott family.