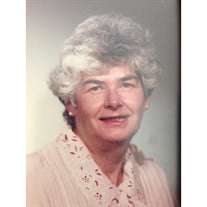 Patricia Clare Potter Morris, wife of late Navy veteran, James J. Morris Sr., passed away on August 13, 2014. Following a mass at The Basilica of St. Mary of the Assumption held in her honor and visitation at Cawley & Peoples Funeral Home, she will be laid to rest beside her husband in Oak Grove Cemetery in Marietta, Ohio. She was born November 10, 1930, in Parkersburg, West Virginia, to Charles E. and Gwendolyn Dennison Potter, one of seven children. Her family is celebrating her life and her achievements. Her greatest achievements were that of a loving wife, mother, aunt, grandmother, great-grandmother and sister. She married her husband, Jim, in November 1952, and raised a family, who loved her dearly. Jim and Patsy enjoyed 39 wonderful years of marriage before Jim's passing in April 1991. Patricia Clare Potter Morris was a 1949 graduate of St. Mary's Catholic High School, Marietta, Ohio. She was the valedictorian of her class and a cheerleader for the 'fighting Irish.' She was proud of her Irish heritage and possessed a spirit of independence that she passed on to her children. Patsy and her husband, Jim, enjoyed playing bridge, bowling, and dancing. They enjoyed the latter most of all, starting with the Jitterbug and progressing to square dancing as members of the Buckeye Twirlers. She influenced her children and others in a positive way in her capacity as Girl Scout Leader, lector, Eucharistic Minister, and member of the choir and Catholic Women's Club at St. Mary's Basilica, volunteer for the St. Vincent De Paul charity, chaplain of the local chapter of the Daughters of the American Revolution (DAR), and clerk at the Ohio Bureau of Employment Services (OBES) from 1972-1993. In her position at the OBES, she spent many "double days" helping countless unemployed workers obtain benefits that enabled them to subsist. She was preceded in death by her grandson, Matthew Morris LoMastro and her two brothers, Donald and Anthony Potter, both U.S. Navy veterans, as well as three sisters, Eileen Engle of Lowell, Ohio, Peggy Fitzgerald of Marietta, Ohio, and Joan Vannoy of Portland, Connecticut. She is survived by her sister Theresa (Potter) Morris of Columbia, South Carolina. Patsy is survived by her four children, three grandchildren, and five great-grandchildren. Her eldest daughter, Colleen Annette Morris M.D., her son-in-law, Steve LoMastro, and grandchild, Andrew LoMastro, reside in Las Vegas, Nevada. Her daughter, Sheila Elaine Dye, and her son-in-law, Fred, reside in Marietta Ohio. Her grandchild, Nathan Dye, his wife Jackie, and three great-granddaughters (Amalie, Clara, and Elsie), reside in Olney, Maryland. Her grandchild, Elaine Dye, her husband, Nick Streaker, and two great-grandsons (Rowan and Jack), reside in North Bethesda, Maryland. Her son, James Morris Jr. (CWO5 USN Ret.), and daughter-in-law, Lina, reside in Pensacola, FL. Her youngest daughter, Mary Pat Morris, and her partner, Angi Wigal, reside in Vincent, Ohio. The family would like to thank the staff at Emeritus of Marietta and Arbors of Marietta for their love and care shown to Mom and family at this difficult time. Words can neither express the sorrow in her passing, nor the joy that she brought to her family and beloved friends. Rest in peace, Mom, and know that the world is a much better place for having enjoyed such a rich life filled with love and compassion! God bless you and hold you dear, Mom! Funeral Liturgy, with Mass, will be at the Basilica at 1:00 p.m. on Saturday, August 16, 2014, with the Rev. Msgr. John Michael Campbell as celebrant. Visitation will be at the Marietta Chapel of Cawley & Peoples Funeral Home on Friday from 2 to 4 and 6 to 8 p.m., with a Vigil Service at 3:00 p.m. Donations may be made to the St. Vincent DePaul Society, c/o The Basilica, 506 Fourth St., Marietta, Ohio 45750.

Patricia Clare Potter Morris, wife of late Navy veteran, James J. Morris Sr., passed away on August 13, 2014. Following a mass at The Basilica of St. Mary of the Assumption held in her honor and visitation at Cawley & Peoples Funeral Home, she... View Obituary & Service Information

The family of Patricia Clare Morris created this Life Tributes page to make it easy to share your memories.

Send flowers to the Morris family.