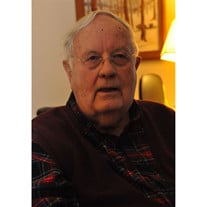 Richard A. (Dick) Crago, 84, of Marietta, Ohio graduated from his earthly life on December 16, 2014 in the presence of his family. Dick lived a full and multifaceted life, focused on his family, church and serving others. He was born near Pittsburgh, PA and lived in New York, New Jersey, California and Wisconsin during his school years. While living in Binghamton, NY as a high school senior, Dick met Helen Taylor through a church youth group and they recently celebrated their 61st anniversary. After graduating from the University of Wisconsin, Madison with his degree in metallurgical engineering, Dick and Helen married and moved to Niagara Falls, NY where he worked for Union Carbide Metals. He worked for Union Carbide throughout his 41 year career, even as the company's name changed through acquisitions. Throughout his career he earned a number of patents and Dick retired from Elkem in Marietta, OH in 1993. Throughout his life Dick and his wife Helen were very involved as members of Presbyterian Churches wherever they lived. They were instrumental in starting the Island Presbyterian Church, Grand Island, NY in 1959. Dick served as a church elder, deacon, trustee, Sunday School teacher, choir member and on many committees in churches in NY and Ohio. From 1960 - 2014 he sang in the bass section of several church choirs including a few directed by Helen and in special community choirs. After returning to Marietta, OH in 1989 and rejoining First Presbyterian Church, Dick led projects involving stained glass work, hanging of the greens and earned his reputation for asking the most probing questions in his Sunday School classes. Sports played an important role in Dick's life from his school years until his 70s. Tennis, badminton, softball and baseball were among his favorite participatory sports. Dick's lightning-fast tennis serve earned acclaim on many Marietta tennis courts. Family always came first and Dick and Helen's five children enjoyed vacation trips throughout the US, great mentoring for education, music, sports, careers and fulfilling lives. As a very engaged father and grandfather Dick was a great storyteller, game player and teacher. He loved to make funny and touching books comprised of pictures with his crazy captions. Friends and family members treasure the books he made. Dick is survived by his wife Helen and children: Cheryl Crago (Dave Reeser) of Greensboro, NC; Paul Crago (Ellen) of Lexington, NC; Holly Conway (Jim) of Millersburg, OH; Bonnie Van Nort of Clifton, VA and Dan Crago (Julie) of Lebanon, OH. His grandchildren include Laura and Rebecca Crago, Collin (Tera), Bryce (Alexandra), Weston and Brynley Conway, Justin and Corinne Van Nort and Samantha, Thomas and William Crago. A celebration of Dick Crago's life will be held on Saturday, December 20 at 1:00 p.m. at First Presbyterian Church at 4th and Wooster Streets, Marietta, Ohio, with The Rev. David Smith officiating, and a reception will follow at the church. On Friday evening December 19, the family will receive visitors in the social hall of First Presbyterian Church from 6 - 8 p.m. The Crago family requests that memorial gifts in lieu of flowers be directed to First Presbyterian Church at 501 Fourth Street, Marietta, Ohio 45750.

Richard A. (Dick) Crago, 84, of Marietta, Ohio graduated from his earthly life on December 16, 2014 in the presence of his family. Dick lived a full and multifaceted life, focused on his family, church and serving others. He was born near Pittsburgh,... View Obituary & Service Information

The family of Richard Crago created this Life Tributes page to make it easy to share your memories.

Send flowers to the Crago family.