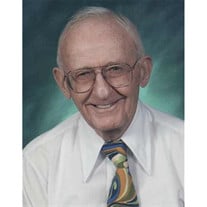 Richard H. "Dick" Smith, 97, a life-long resident of Marietta, died Friday, Oct. 30, at Heartland of Marietta nursing home. He was born April 4, 1923, at Marietta to Howard Dewey Smith and Alma Abendschoen Smith. He was married March 4, 1944, while stationed at New York City, N.Y., to the former Twila Moray Henning of Archer's Fork and Marietta, who died in 2005. He had been a 1941 graduate of Marietta High School and attended Miami University at Oxford, Ohio, for two years before being interrupted to serve in World War II with the U.S. Army in the United States and Europe. Until 1971, he was the managing partner of A.H. Smith & Son (now Smith Concrete near Reno), started by his grandfather, Albert Henry Smith. During the Smith family era, the company's properties were across the Muskingum river from each other, some in Harmar while the company office and concrete sand and gravel bunkers were at to-day's Marietta Harbor, 1 Butler St. After Richard Smith sold the family company, he then became head of the Housekeep-ing Department at Marietta Memorial Hospital, until he retired in 1985. He was active in the hospital's retirees group for many years. He was a member of the Marietta City Board of Education during the planning and construction of Marietta Senior High School on Davis Avenue in the 1960s. He also had served on the YMCA board of directors and on the board of Franciscan Meals. He was a 70-year member of American Union Lodge, F&AM; member of American Le-gion Post 64 and Putnam Congregational Church. He also had once been active in Rotary and Ad Club. He is survived by one daughter, Gae M. Leachman (James) of Jonesboro, GA; two sons, John H. Smith (Betsy) of Proctorville, Ohio, and Grady W. Smith (Sue) of Marietta, Ohio; one grandson, five granddaughters and seven great-grandchildren. Graveside services, including the playing of Taps, will be in Oak Grove Cemetery on or near his birthday, Sunday, April 4, 2021. Memorial contributions are referred to organizations he participated in or to the charity of the donor's choice. The Marietta Chapel of Cawley & Peoples Funeral Home is handling arrangements. The family wishes to express thanks to Heartland of Marietta and Buckeye Hospice staffs for care of Dick and the Smith family. Cawley & Peoples is honored to serve the Smith family and offers online condolences and many other resources by visiting their website, CawleyandPeoples.com.

The family of Richard H Smith created this Life Tributes page to make it easy to share your memories.

Send flowers to the Smith family.