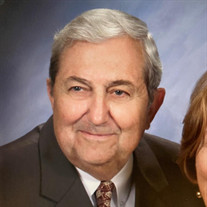 Robert P. “Bob” Lamb, age 85, of Vienna, WV, passed away Saturday, October 16, 2021, surrounded by his family. He was born on August 8, 1936 in Huntington, WV, a son of the late Robert and Janet (Puryear) Lamb. He was preceded in death by his son Robert Stephen and his siblings, Richard Lamb and Marguerite Fairbanks. He is deeply missed by his wife of 60 years, Mary Elizabeth (Strick). Together they raised four children, Eric (Betsy) Lamb, Elizabeth (Kyle) Nay, Philip (Maria) Lamb, and Aimee (Mark) Schmelzer. He is also survived by his 23 treasured grandchildren: Alex, Michael, Jared and Justus Lamb; John and Rachel Nay; Juliana, Grace, Lauren, Joseph, Gemma, John, Peter and Gabriella Lamb; Olivia, Clare, Maximillian, Nicholas, Mark Augustine, Henry, Elena, Catherine and Louis Schmelzer. He was a loving, devoted husband, father and “Papa”. His pride and joy was his family, and sharing his love, time, wisdom and wit with his grandchildren was one of his greatest pleasures. He graduated from Marshall University, served in the National Guard, and enjoyed a successful career in Personnel and Labor Relations, known always for his moral integrity and commitment. He was an unwavering defender of the unborn. He loved his country and its veterans; never missing an opportunity to express his gratitude to each one he met. He never met a stranger and had the gift of making people smile. He was a long time member of The Basilica of St. Mary of the Assumption, Marietta, OH, where he came home to the Catholic Church on Easter 2005. Friends and family will be received on Friday, October 22, 2021, Cawley & Peoples Funeral Home, 408 Front Street, Marietta, OH from 8:30-10:30 am. A Requiem Mass will follow at 11:00 am at The Basilica of St. Mary of the Assumption, 506 4th Street, Marietta, OH. Memorial contributions may be made to: Washington County Right to Life, P.O. Box 251, Marietta, OH 45750. Cawley & Peoples is honored to serve Bob’s family and offers online condolences as well as many other resources by visiting their website, CawleyandPeoples.com or by going to their Facebook page.

The family of Robert Puryear Lamb created this Life Tributes page to make it easy to share your memories.