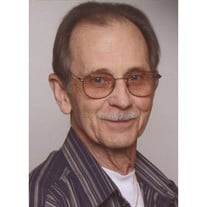 Ronald E. Kemp, 76, passed peacefully, surrounded by family, on Wednesday, January 21, 2015. He was born September 5, 1938 in Marietta to Emory S. and Catherine Howell Kemp. He was a 1956 graduate of Marietta High School. On September 13, 1959, he married Vivian A. Theobald. They have one son, Kevin D. Kemp, his wife, Robyn and granddaughter, Jor'Donna, all of Hilliard. As a member of Plumbers & Pipefitters Local #168, he began working at Dravo/Connex, having survived the Belpre Shell incident and ended his career with Pioneer Pipe. Ron was a member of the First Congregational United Church of Christ, had been a member of the Jaycees, the A.O.L.C. and was a member of Masonic Lodge #390, F&AM. He had been a member and past commodore of the Marietta Boat Club. He also sat on the WASCO board in the 1970s. In addition to his wife, son, and granddaughter, he is survived by his sister, Shirley Lutz, of Williamstown, WV, brother, Larry (Judy) Kemp, of Marietta and brother in law, David McKenna, of Marietta, as well as many loving nieces and nephews. He was preceded by his brother, Jack Kemp, sister, Patsy McKenna, and brother in law, Clayton Lutz, Jr. Funeral services will be held at 11:00 a.m. on Friday, January 23, 2015, at the Marietta Chapel of Cawley & Peoples Funeral Home with the Rev. Linda N. Steelman officiating. Entombment will be in East Lawn Mausoleum. Friends may call at the funeral home on Thursday from 2 to 4 and 6 to 8 p.m., where there will be a Masonic Service held at 7:30 p.m. Donations may be made to the First Congregational United Church of Christ, 318 Front St., Marietta, OH 45750. The family extends their thanks to Dr. Kelli Cawley and to Niesha Lockney of Marietta Home Health and Hospice.

The family of Ronald Eugene Kemp created this Life Tributes page to make it easy to share your memories.

Send flowers to the Kemp family.