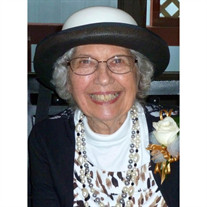 Longtime Marietta resident, Rose Marie Peschan Thomas, [91], passed away at her Marietta home on July 18th, 2016, surrounded by her loving family. She is survived by 3 children: Gregory Thomas (Kristin Ahlness) of Ithaca NY, Stephanie Guss (Jonathan) of Franklin Lakes NJ, and Johanna Theobald (Rick) of Mt Juliet TN; 6 grandchildren: Brendan Thomas, Eva Schlinger, Dylan, Samantha and Gillian Guss, and Justin Theobald; one great grandchild: Laylah Rose Marie Theobald; and brother-in- law Bill Hochreiter of Rochester, NY. Older sister Ilse Weismantel passed away in 1994, and younger sister Irene Hochreiter passed away in 2014.                                                                                                                                              Born on September 8, 1924 in Rochester, NY to Otto J. Peschan and Emma Walter Peschan. Rose Marie graduated West High and then worked at Eastman Kodak, becoming the editor of "Kodakery", the company's weekly newspaper for its 8,000 employees, during the World War II years. Returning to school full-time after the War, she attended Ohio University, becoming only the second woman to edit the OU Post. Graduating with high honors, Rose Marie was elected to Phi Beta Kappa, the journalism honorary society Kappa Tau Alpha, Mortar Board, Sigma Delta Chi, and Women in Communication. After graduation she worked for the Columbus Dispatch as a reporter/feature writer/photographer. Her celebrity interviews ranged from Liberace to Eleanor Roosevelt. Coming home from dinner with her future husband one evening, Rose Marie and her date followed the sound of sirens to the Ohio State Penitentiary "Halloween Riot" of 1952. She was one of the first reporters to cover the story and the only female on the scene, which made the warden so nervous that he justifiably put her behind bars for her own protection. In 1955, Rose Marie moved to Marietta with her husband attorney Richard J. Thomas. She became the first Public Relations director for Marietta Memorial Hospital, editing the monthly Memorial Memo and starting the first pre-natal class. Taking time off to raise her three children, Rose Marie remained active in the community. She was a member of St Mary's Catholic church and a member of its Education Committee which started the Montessori program at St Mary's School. Rose Marie also served on the Marietta Board of Health, the Ohio University Board of Trustees, and the Advisory Board of OU's television station. She was a long time member of the National Society of Arts and Letters, American Association of University Women, and Zonta International. Active in politics, from the 1950s through the present, she was a longstanding member of the Washington County Democratic Women and served on the County Democratic Executive and Central Committees. She was fondly referred to as the "matriarch" of Washington County Democrats. For decades Rose Marie was also an active worker at the local polls. Returning to the workplace in 1978, she served for 16 years as administrator of senior volunteer programs (Senior Companions, Foster Grandparents, and VISTA) covering 27 Appalachian counties in Ohio under the sponsorship of the Corporation for Ohio Appalachian Development. She also organized and had a faithful following for her weeklong fund raising adventures, expanding the horizons of many local seniors. In 1993 she was selected as Ohio's outstanding administrator of volunteer programs. Upon retirement in 1994 the Ohio House of Representatives and Senate voted resolutions honoring her service. Working in proximity with seniors amplified her interest in helping address issues associated with aging. Her volunteer activities included memberships on the County Council on Aging and the Regional Advisory Council to the Area Agency on Aging. She was named a delegate to the 1995 White House Conference on Aging, and to the White House Mini-Conference on Issues Affecting Older Women in 1980. She was a charter member of the Older Women's League, a national advocacy group for women. She was on the Board of the O'Neill Senior Center and a member of the O'Neill Singers. In 1998 she traveled to China with the American Society of Aging during the International Year of Aging, meeting and exchanging ideas on senior care and lifestyle with leading Chinese officials. Rose Marie enjoyed travel, music and opera. In her travels she attended operas at St. Petersburg's Kirov Theater, the West Berlin Oper Haus, the Metropolitan Opera in New York City, the Cincinnati Opera, and even a Chinese opera in Beijing. She made numerous trips solo to visit relatives and friends overseas in East and West Germany, Italy, and Czechoslovakia. In 2007, at 83, she and her daughters and daughter-in- law took a tour of the Austrian Alps, the land where her parents were born and her father had served in the Austrian Army in World War I. Her favorite trips were always to visit her children and grandchildren in New York State, New Jersey, and Tennessee. She wrote and published her autobiography, "Trip of a Lifetime" for her friends and family. Rose Marie wished to express her deep thanks to Pam Sewell, Cayla and Lisa Collins, Maribeth Browne, Christine Lisk, Greg Cline, Dave and Jean Cech, and the many friends and hospice caregivers who made her home hospice possible. Visitation will be held Wednesday July 20 th from 2 to 4 PM and 6 to 8 PM, with a vigil service held at 3 PM at Cawley & Peoples, 408 Front Street, Marietta. There will be a funeral mass in Marietta at the Basilica of St Mary of the Assumption Thursday July 21 st at 10 AM, followed by a reception. Burial will take place at Holy Ghost Church Cemetery in Rochester, N.Y. Memorial Contributions may be made in her name to the O'Neill Senior Center Foundation or the St. Mary School Foundation, or the St. Monica School Foundation in Rochester, N.Y.

The family of Rose Marie Thomas created this Life Tributes page to make it easy to share your memories.

Send flowers to the Thomas family.