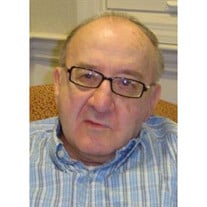 Thomas Frederick Gruber, 79, of Marietta, died Thursday, August 7, 2014, in the Ohio Veterans Home in Georgetown, Ohio. He was born February 22, 1935 in Marietta to Ernest and Helen Brinker Gruber. Fred was a graduate of St. Mary's High School in Marietta. He retired from the U.S. Coast Guard and was later employed at Silvesco. He was a member of The Basilica of St. Mary of the Assumption and had been an active resident at The Inn, at Marietta. Fred is survived by his nephews and nieces, Sherry (George) McCleary, Terry (Karolyn), Pat (Cathy) and Paul (Rachel) Schafer, Dan (Phyllis) McCabe, Shelly Lauer and Greg (Sharon) McCabe. He was preceded in death by sisters, Vera Marie Schafer and Sue McCabe. Funeral Liturgy, with Mass, will be held at The Basilica of St. Mary of the Assumption on Monday, August 11, 2014, at 10:00 a.m. Visitation will be at the church for one hour prior to his mass. Burial will be in New St. Mary's Cemetery and donations may be made to the cemetery fund, c/o The Basilica, 506 Fourth St., Marietta, OH 45750.

The family of Thomas Frederick Gruber created this Life Tributes page to make it easy to share your memories.

Send flowers to the Gruber family.