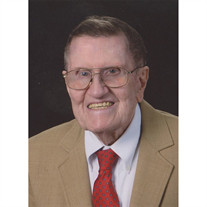 Walter Joseph O'Connor, 91, of Marietta, Ohio, died Friday, October 18, 2019 at Elmcroft of Marietta. He was born on November 22, 1927 in Pittsburgh, PA, to Walter Joseph and Rose Virginia Shea O'Connor. Walter was a 1945 graduate of Central Catholic High School and a 1956 graduate of the University of Pittsburgh, with a Bachelors of Business Administration. He retired from Elkem Metals in 1985 after 35 years of employment. Walter was a member of The Basilica of St. Mary of the Assumption where he was an usher for many years, and volunteered with his wife at Marietta Memorial Hospital, American Red Cross and Franciscan Community Meals. He is survived by his wife, Mary O'Shea O'Connor, whom he married on June 9, 1956; five children, Thomas O'Connor (Wayne) of Phoenix, AZ, William O'Connor (Lori) of Marietta, Kathleen Wharff (Chris) of Marietta, Marianne Gammon (Jacob) of Columbus, OH and Eileen O'Connor (Michael O'Harra) of Columbus; six grandchildren, Kevin Wharff (Molly), Casey Wharff, Shawn O'Connor, Will O'Connor, Jack Gammon and Emily Gammon; sister, Rose Marie O'Connor of Brattleboro, VT; and many nieces and nephews. He was preceded in death by his brother, John O'Connor. Funeral Liturgy with Mass will be held at 10:00 a.m. on Tuesday, October 22, 2019 at The Basilica of St. Mary of the Assumption, with The Rev. Msgr. John Michael Campbell celebrating. Visitation will be at the Marietta Chapel of Cawley & Peoples Funeral Home on Monday 5 to 7 p.m. with a Vigil service held at 5:00 p.m. His family would like to thank all of his caregivers from Elmcroft and Amedisys Hospice for all of their love and support. Donations may be made in his memory to Amedisys Hospice. Cawley & Peoples is honored to serve Walter's family and offers online condolences and many other resources by visiting their website, CawleyandPeoples.com .

Walter Joseph O'Connor, 91, of Marietta, Ohio, died Friday, October 18, 2019 at Elmcroft of Marietta. He was born on November 22, 1927 in Pittsburgh, PA, to Walter Joseph and Rose Virginia Shea O'Connor. Walter was a 1945 graduate of Central... View Obituary & Service Information

The family of Walter Joseph O'Connor created this Life Tributes page to make it easy to share your memories.

Send flowers to the O'Connor family.