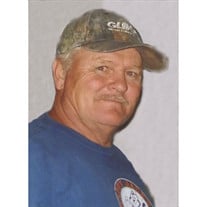 William L. "Jack" Grayson, 60, of Cutler passed away on Wednesday, February 3, 2016, at Riverside Hospital, surrounded by his family. He was born March 13, 1955 in Zanesville to the late John Louis and Evah Elaine Renshaw Grayson. He was a 1973 graduate of Marietta High School. Jack worked in the construction field all of his adult life. He was a former auxiliary member of the VFW Post 5108 and participated in the Thursday Senior Golf League at Lakeside Golf Course. Jack was an avid hunter, fisherman, golfer, farmer and gardener. He also enjoyed NASCAR and watching old westerns on TV, but, above all else, he loved his family and friends. He is survived by his wife of 42 years, Bindy; their three sons, BJ and Shana Grayson of Vincent, Eric and Sarah of Cutler and Todd and Maggie of Mansfield, TX; eight grandchildren, Avery, Wyatt, Molly, Brandon, Jackson, Tucker, Annie and Lucy; his brothers, Tim and Serena Grayson, Andy Grayson and Jay Grayson; sisters, Emily "Cricket" Wendelken and Tina Myers. Also survived by Brett Thrasher, Brandon and Danielle Thrasher and Jason and Cassie Thrasher, whom he also considered as his sons; numerous cousins, nieces, nephews and the most amazing friends a man could ever have. Jack was loved by all that knew him. In addition to his parents, he was preceded in death by brothers, Thomas, Danny and John, sister, Ruth Elaine Richards, and sisters in law, Irene, Mary and Thomasena. Funeral services will be at 1:00 p.m. on Saturday, February 6, 2016, at the Barlow Chapel of Cawley & Peoples Funeral Home, with his nephew, Dan Dudich, officiating. The family will greet friends for two hours prior to the service. There will be a potluck dinner at Goodfellows Park immediately following the service to share stories and memories. The family requests in lieu of flowers, a donation in Jack's honor may be made to a charity of your choice.

William L. "Jack" Grayson, 60, of Cutler passed away on Wednesday, February 3, 2016, at Riverside Hospital, surrounded by his family. He was born March 13, 1955 in Zanesville to the late John Louis and Evah Elaine Renshaw Grayson. He was a 1973... View Obituary & Service Information

The family of William L. Grayson created this Life Tributes page to make it easy to share your memories.

William L. &quot;Jack&quot; Grayson, 60, of Cutler passed away on Wednesday,...

Send flowers to the Grayson family.