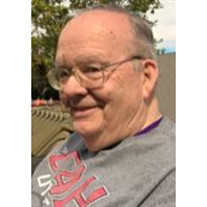 William "Bill" Wittman Lane, 81, formerly of Marietta, died Thursday morning, June 27, 2019 at Hickory Creek in The Plains, OH. Born July 23, 1937 in Toledo, OH, he was the son of the late Robert F. and Virginia Jane Wittman Lane. He was a graduate of Carnegie Tech and received his Masters at The Ohio State University. Bill was a member of the American Society of Civil Engineers and a Professional Engineer licensed to practice Structural Engineering in many states. In 1979, Bill decided to go into business for himself as a consulting structural engineer and worked with many plants and architects throughout the area, including Marietta Concrete, DuPont, Chevron, Solvay, Pickering Associates and numerous others. He also was a member of Masonic Lodge #129, in Williamstown, WV. Bill is survived by two sons, Dan Lane, Seffner, FL and Tom Lane (Cathey), Lakeland, FL; four grandchildren, Robert, Ashley, Michael and Christina Lane; two sisters, Mary Liotti (Charles) and Sally Lane, all of Parkersburg, WV; son-in-law Kevin Hershner (Melissa) of Lexington, OH, and their daughters Hannah and Haylee; several nieces and nephews; and special friend Elna Christensen, of East Carbon, Utah. He was preceded in death by his wife, Charlene Rae Lane, on Feb. 20, 2013. They had been married since Nov. 19, 1960. He was also preceded in death by his daughter, Debra Kay Hershner. The family would like to thank Pickering Associates for honoring his retirement in 2016. The family would also like to thank Hickory Creek Nursing Home at The Plains and Ohio Home Health Hospice for their superb care of Bill during his last days. A public committal service at Riverview Cemetery in Williamstown will be announced after arrangements are confirmed to allow his two sons and other family members to be present. The time and date for that service will be published in a later edition of this paper.

William "Bill" Wittman Lane, 81, formerly of Marietta, died Thursday morning, June 27, 2019 at Hickory Creek in The Plains, OH. Born July 23, 1937 in Toledo, OH, he was the son of the late Robert F. and Virginia Jane Wittman Lane. He was a... View Obituary & Service Information

The family of William Wittman Lane created this Life Tributes page to make it easy to share your memories.

Send flowers to the Lane family.