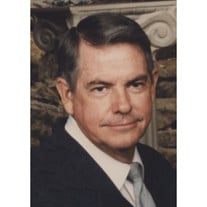 William S. "Bill" Tackett, 82, Fleming, Ohio, died Friday at Marietta Memorial Hospital. Born July 21, 1932 in Huntington, WV, he was the son of the late George Boyd and Audrey Pauley Tackett. He received his Bachelor of Science degree in Agricultural Education from The Ohio State University in 1957. Bill was inducted into the Army in 1955 and served until 1957. After receiving training in microwave radio repair, he was stationed in Japan. Bill taught Vocational Agriculture at Warren Local High School from 1960 to 1985. In 1976 he received a Master's degree in secondary education from Ohio University. He has been active in community service, having served as President and Secretary of the Scenic Hills Lions Club, as a ruling elder of the Veto Presbyterian Church, as President of the Washington County Farm Bureau and as President of the Washington County Retired Teachers. Bill and Florence enjoyed traveling, but farming was his main hobby. He is survived by his wife, Florence Lash Tackett, whom he married Christmas Day in 1955. Also surviving are two daughters, Linda Browne (Jeff) of Portsmouth and Sharon Hayes (Francis) of Barlow, three grandchildren, Sarah Klemm (Karl), Emma Browne and Eric Browne, and two great grandchildren, Noah and Natalie Klemm. Also surviving are two sisters, Charlotte Nachtrieb of Walnut Creek, CA and Karen Drasler of Elyria, OH, and by many nephews and nieces. Bill was preceded in death by a sister, Phyllis Pitcock. Funeral services are scheduled for 10:30 am Tuesday, September 9, 2014, at the Barlow Chapel of Cawley & Peoples Funeral Home, with The Rev. Andrew "Andy" Gerhart officiating. Burial will be at Evergreen Cemetery, with Full Military Honors observed. The family will greet friends at the funeral home on Monday, from 5-8 pm. Bill's family suggests that memorial donations may be directed to the Warren FFA Alumni Chapter Scholarship Fund, P. O. Box 52, Bartlett, OH 45713.

The family of William S. Tackett created this Life Tributes page to make it easy to share your memories.

Send flowers to the Tackett family.