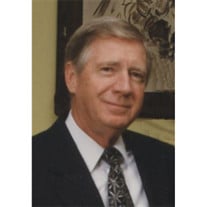 Charles "Gene" Eugene Hall of Marietta passed away Tuesday December 24th at Marietta Memorial Hospital. Gene was born November 19th 1932 to John and Norma Hall of Dart, Ohio. He graduated from Lawrence High School in 1950 then graduated from Mountain State College in 1952. He then spent four years during the Korean War in the Air Force Security Services as a cryptographic operator and supervisor. After returning home, Gene graduated from Ohio University with a degree in business administration. He married Patricia Ann Cline on November 21st, 1956. From 1962-1972, Gene owned several local Mary Carter Paint stores, then Pace Oil Company from 1973-1991. He held various positions at Babcock and Wilcox Construction Company from 1966-1978. In 1978 he became Co-Founder and CEO of Power Maintenance, Inc. He served on the boards of Rampp Company, Leasco Equipment Services, Inc. and Bank One of Marietta. He was member of the First Baptist Church of Marietta where he had served as trustee. Gene was a member of the First Baptist Church Adult Sunday School, American Legion Post 64, American Union No. 1 Masonic Lodge, Valley of Cambridge Scottish Rite, Aladdin Temple and the Marietta Shrine Club. Gene and Patty were everything to each other and cherished their time spent together. He enjoyed playing golf with his friends and colleagues at their Wednesday night golf league. Proceeded in death by his parents, Mother and Father in law, brothers in law, Jack Cline, Roger Cline and Robert Theobald. He is survived by wife, Patricia, daughter, Candice Hall-Cisler (Chuck), son, Kevin Mark Hall (Leah), son, Jon Charles Hall (Michelle), grandchildren, Halen Hall-Cisler, Charlie and Ciara Hall, Charles and Zora Hall, Brother, Howard Hall (Donna), Sister, Janila Theobald, Sister in law, Donna Cline, brother in law, Ricky Cline (Debbie), as well as many other relatives and friends. Funeral services will be held at 11:00 a.m. on Tuesday, December 31, 2013, at the First Baptist Church in Marietta, with The Rev.'s Chad Mugrage and Karen Bates officiating. Entombment will follow in East Lawn Mausoleum. Visitation will be on Monday from 2 to 4 and 6 to 8 p.m. at the Marietta Chapel of Cawley & Peoples Funeral Home, and for one hour prior to services on Tuesday at the church. Donations may be sent to First Baptist Church of Marietta and Marietta Memorial Hospice.

The family of Charles Eugene Hall created this Life Tributes page to make it easy to share your memories.

Send flowers to the Hall family.