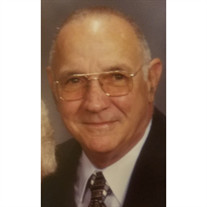 Charles R. West, 86, of Marietta, Ohio, died Sunday, August 12, 2018, at Marietta Memorial Hospital. He was born on July 31, 1932 in Marietta, to the late Harry and Helen Slider West. Charles attended Marietta City Schools and left school to go into the Air Force, serving his country during the Korean Conflict, from 1950 to 1953. He later received his GED. He was a member of the Basilica of St. Mary of the Assumption, the Knights of Columbus, the United Steel Workers, and a lifetime member of The American Legion, Post #64. He is survived by his wife, Martha Huck West, whom he married on February 15, 1955; children, Linda Packard (Randy) of Randolph, NY, Michael West (Susan) of Waterford and Dr. Alan West (Isabelle) of Tenafly, NJ; seven grandchildren; five great grandchildren; sister, Kathleen French (Roger) of Marietta; and many nieces and nephews. He was preceded in death by his grandson, Ben McAtee. Funeral services will be held at 10:00 a.m. on Wednesday, August 15, 2018 at the Marietta Chapel of Cawley & Peoples Funeral Home. Burial will follow in East Lawn Memorial Park. Visitation will be on Tuesday from 4 to 6 p.m. at the funeral home. Donations may be made to Marietta Home Health and Hospice or to the Alzheimer's Association.

The family of Charles R West created this Life Tributes page to make it easy to share your memories.

Send flowers to the West family.